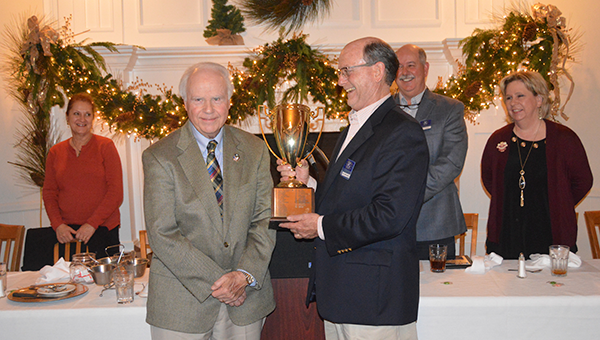 The Kiwanis Club of Andalusia honored John Vick with its citizen of the year award Monday night.

“Most of us are aware of his support in making the Honor Flight program assisting veterans in making trips to Washington, D.C., to visit the memorial on the mall and other sites. He is a leader in support other veterans’ activities, including Veterans and Memorial Day parade,” Rhett Johnson said in his nomination.

“Less obviously, he and his wife, Fay, are significant supporters of the public schools systems here in the county,” Johnson wrote. “He is very active in the Lions Club in Andalusia, serving in several leadership roles. He has been a Lion for over 40 years and has served as the president, as well as other offices.”

Past President Tim Mersmann presents Don Cotton with the Kiwanian of the Year award.
Michele Gerlach/Star-News

Vick serves as chair of the board of directors of CCB Community Bank, was a charter member of the local Auburn Club, and founded and helps the Andalusia Tennis Association, which has provided professional coaching assistance to numerous children in the county, many of whom would not have had that opportunity without his help.

“He is a long time member of First United Methodist Church, and is active in virtually every project and activity undertaken by the church,” Johnson wrote. “He has served as a Sunday School teacher, chaired the administrative board, and acts as a volunteer landscaper helping to beautify the ground of the church.”

Vick was instrumental in producing video interviews of World War II veterans. The oral histories of the period have been recognized as an invaluable collection, and copies have been placed in the State Archives in Montgomery.

The 1958 graduate of Andalusia High School attended Auburn University on a Naval ROTC scholarship, the first in his family to go to college. At AU, he earned a degree in mechanical engineering. He enlisted in the Navy and served as the chief engineer aboard a destroyer, participating in the Cuban Blockade during the Cuban Missile Crisis.

He enjoyed a successful career in the forestry industry, and remains a significant forest landowner in the county.

In 2015, he was named an Andalusia High School Outstanding Graduate, and earlier this year received the Rotary Club’s Spirit of Andalusia award.

He and his wife, Faye, are the parents of three daughters, Patricia Moody, Claire Luenberger, and Amanda Vick.

The presentation was made during the Kiwanis Club’s annual Fair Appreciation Banquet. Immediate Past President Tim Mersmann presented the Kiwanian of the Year Award to Don Cotton.

Positive publicity brings visitors to Candyland from near, far in 1st weekend [with gallery]

The positive publicity generated when Christmas in Candyland caught the attention of national magazines is already paying off. In November,... read more