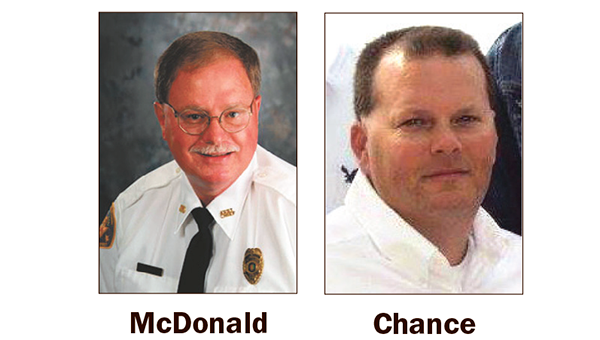 McDonald has worked in law enforcement for 42 years, the last six as Opp police chief.  The best part of that job has been working with the people in the department, he said.

“You get to work with some fantastic people in this department,” McDonald said. “You get to watch them grow as people and as officers.”

And that’s what he expects to miss most.

“You make connections with people and these are some pretty great folks,” he said.

McDonald said his retirement plans include getting back into some former hobbies.

“I think I’m going to get back into Native American artifact hunting,” McDonald said. “I’m really big into that. I’m going to take up fishing again and I’m going to spend some time with my granddaughter.”

Chance said that he is looking forward to continuing some of the work that McDonald has done, but he said that his biggest challenge will be keeping officers.

“Hiring officers and keeping officers is going to be my biggest challenge,” Chance said. “We just don’t see many people wanting to get into our line of work now. So that is one of the biggest things that I would like to do is to keep the ones that we have and then try to hire good people. I just hope to continue to improve the police department the best that I can.”

Chance has served as assistant chief since 2012, and has worked as a police officer for 21 years, all for the City of Opp.

“I started as a dispatcher,” Chance said. “And then Chief Metcalf sent me to the police academy and I then got certified in 1998.”

She said that Chance is ready to be the new chief of the Opp Police Department.

“He will do an excellent job,” Bracke said. “He has been with the OPD for 21 years and I think he is very well qualified.”

Chance announced that his assistant chief will be David Harold.

“David has been working as an investigator for the last several years,” Chance said. “He started about the same year that I did. He has been here a long time and has done many jobs. He started off as patrolman and was a supervisor of the night shift, so I think he will do a great job.”

McDonald said that he has done everything that he could to get Chance ready for the job.

“Kevin is ready and David is ready,” McDonald said.