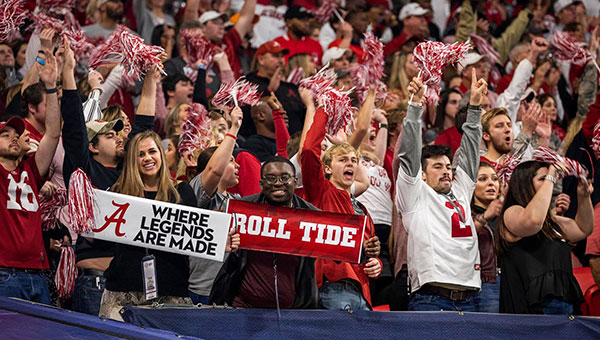 He’s headed to the playoffs, too

Andalusia High School alumnus Darious Davis (above, with the ‘Roll Tide’ sign, and left) won a free ticket to the Capital One Orange Bowl, thanks to Taco Bell’s Live Mas Student Challenge.

Recently Davis has been seen on television at, what seems like, every single University of Alabama Football game. Andalusians usually post to Facebook every time they spot Davis. This week, a photo of him at the SEC Championship has been circulated on Twitter with clever captions. Davis camped out overnight to secure a student ticket to the SEC Championship. Students entered by using the hashtag #LiveMasStudentSectionChallenge, and 3,000 were chosen to attend their school’s playoff game. Those 3,000 students have a shot at tickets to the national championship game on Jan. 7 if their team makes the finals.

Cheering next to Davis in the top photo is fellow AHS alumnus Grant Holley.

Lettuce is back, but demand has driven up prices

For those who’ve been missing fresh salads since the blanket recall of Romaine lettuce just days before Thanksgiving, today could... read more