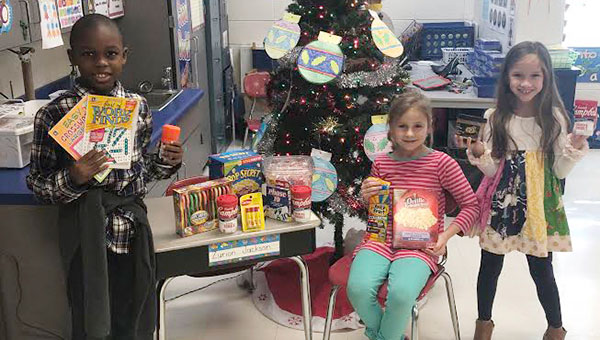 Chavion Paige, Stella Wells and Brennah Chapman pose with the supplies they are sending to soldiers overseas.

“Every year the second graders collect supplies to send to our soldiers overseas,” second grade teacher Beverly Moore said. “We are learning the Seven Habits (of Highly Effective People) with the Leader In Me initiative, so we are trying to find our own voice and try to find other people that need encouragement during the holidays.”

Moore said that Andalusia veteran John Givhan has helped get the second graders in touch with a soldier overseas.

This is a way to spread the Christmas cheer without being selfish, Moore said.

“Instead of exchanging Christmas gifts with each other in class, we try to think about those that need a little encouragement,” Moore said. “Especially during the holidays. We also try to make cards as well for the soldiers.”

Ke’Auna Straughn said that she enjoys this project because she gets to help others.

“Hopefully he will use everything that I gave him,” Straughn said. “But I just like helping others that is why I brought something.”

Second grader Malikye Dorsey said that he enjoys the project because he thinks soldiers are cool.

“Soldiers are cool because they protect our country,” Dorsey said. “They keep people safe.”

Dorsey brought two cans of green beans and tomatoes for the soldiers.

“I hope they use all of it,” Dorsey said. “They need food so they can be strong.”

Suggested items that the second graders will send are: