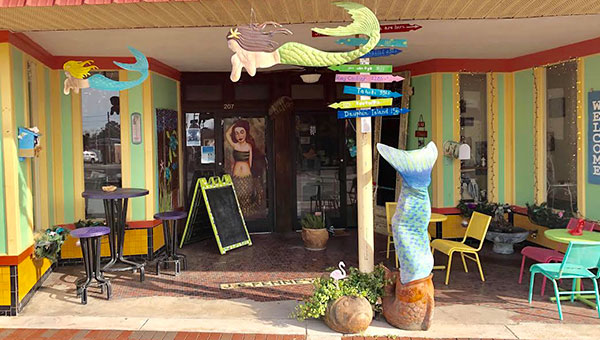 After being closed for several months, the Surly Mermaid Bistro has merged with Joe’s Barista and the Alabama Soap Lady and will open its doors on Dec. 17.

Surly Mermaid owner Jennifer Ambrester  said that she decided to move from her former home on the Court Square because of rent and space issues.

“My mother owns the (Joe’s Barista) building,” Ambrester said. “So the rent is going to be cheaper, and we are going to have a lot more room in this building so we could expand and bring in beer and wine.”

The merger means there will be many items available.

“We will keep on selling Joe’s cappuccinos, espressos and things like that,” Ambrester said. “We will also keep on selling the items available in the Alabama Soap Lady shop like different gifts.”

Along with the change in locations, the bistro is changing its menu to more of a brunch and dinner restaurant.

Ambrester said that the community has been very supportive and positive about the change of venues.

“Everyone has been really positive and excited about us opening again,” Ambrester said. “They seem really interested in what’s to come.”

New things come with the new venue, she said.

“We have outdoor and indoor seating, a sort of lounge room with a T.V., and we have a stage,” Ambrester said. “So hopefully we can get some live music in here eventually.”

Ambrester asks that during the first two weeks that they are open, dinner will be by reservation only.

The new location for the Surly Mermaid Bistro is 207 South Three Notch Street.

Mia Baumgartner is cast as Clara in the Andalusia Ballet’s 2018 production of The Nutcracker, and Eric Lidh reprises his... read more