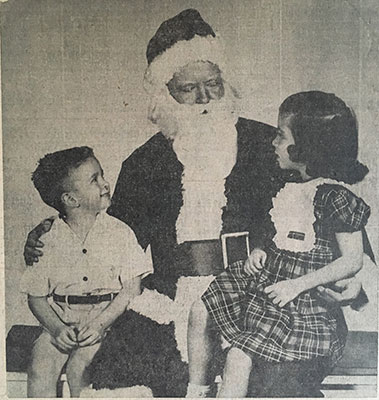 Remember when colored lights were in style?

Christmas in the 1950s in Andalusia was so much like the scenes in “Driving Miss Daisy.” Remember that 1989 movie with Morgan Freeman and Jessica Tandy? The multi-colored Christmas lights like those in the movie have even come back in style almost 70 years later! Makes me want to go to the “picture show,” but I have been stuck on the Hallmark Channel since the end of November! I have been promoting a Hallmark movie to be made in Andalusia’s “Candyland” but then a credible source told me that they are all filmed in Canada – where the real snow is, of course! “Never give up” as Winston Churchill once said back in WWII days. Let’s keep trying!

Aurelia Scherf says “Christmas holds many fond memories for me. My job as a child was setting up the crèche on top of the piano. I would stand on a dining room chair and play with it for hours. After we got the tree set up in the living room, the whole family would get together in the evening and trim the tree. Mom’s mother lived with us, and she would come in with a cup of coffee and watch us from the couch as we chose the special ornaments to put on the tree. We always used multi-colored lights, and my favorites were the bubble lights! In the morning, the living room doors would be shut – no peeking! We had to eat breakfast first! Our stockings would always have fruit and nuts in them as well as one really nice small gift!”

Alan Cotton remembers “the town Christmas decorations in the 1950s were colored lights strung up across the streets from pole to pole. I thought that was great until the city purchased new really special decorations that were attached to the sides of the utility poles. In the Johnson Brothers Jewelry show windows, there was a little Santa Claus playing an organ. It was shiny with lots of mirrors. In the T-P Flower and Gift Shop window on East Three Notch, there was a big life-size Santa that turned and bowed. Mama would park in front of the window so we could get a good look. We were at the Variety Store on River Falls Street one day when a live Santa came in the store. I was probably about three or four years old. I remember wanting to get closer to him, but I was also scared of him at the same time.”

Betty Radcliff Kleiss recalls, “There were certain traditions that signaled the Christmas season being near. For years, my father, ‘Daddy Jim’ would paint a scene on the Count Darling Company automobile dealership showroom window on East Three Notch. It was Santa Claus flying high with the reindeer pulling his sleigh. That really stirred the imagination of my brothers and sister, Rip, Donnie, and Robin! It was the most exciting time of the year. One Christmas we all had the mumps. Seems like everyone in the neighborhood had them, too. Santa brought me a pogo stick like he did my neighborhood friend, Sue, who also had the mumps. Our parents made us wait about two weeks before we could jump on our pogo sticks! Then we challenged each other time and time again to see who would win the title of ‘Pogo Champion of the Neighborhood!’”

Karen LeMay Holley remembers a bowl of apples – green and red – and Brazil nuts that were always out on the coffee table at her home. Wynne Wilson Glenn and Blaine Wilson remember their “Granny Ruth” always having a gum-drop tree fruit drop cookies, and a scrumptious 4 or 5-layer Lane cake for the family. (Didn’t I read somewhere that the Lane cake is now the official State of Alabama cake designated by the legislature?)

Shirley Lacey Wise Morgan who grew up in Red Level remembers going down to “Big Daddy’s” pasture with assorted cousins and chopping down a “Charlie Brown” Christmas tree to drag to the house. Then decorating it with simple decorations along with silver tinsel icicles which someone had carefully taken off last year’s tree!

“We cousins would build a little fire with twigs and leaves in the front yard, it would be freezing cold, and have the best time ever with a string of firecrackers, sparklers, and cherry bombs. Sometimes the men would drain the catfish pond so as to have a big fish fry. While the men were frying the fish, French fries, and hushpuppies in a big old black iron pot outside, the women were in the kitchen making coleslaw, tea, and getting everything ready. Meanwhile the ‘young’uns’ were running wild chasing one another, catching fireflies to put in Mason jars, and playing games like ‘Red Rover’ and ‘Mother, May I?’ I could go on and on and delve into the past! My grandparents, the Sam Coopers, lived about a mile from Red Level High School going toward Loango right across the road from my parents, the Austin Laceys.”

Memories are treasures that we should all pass along to our children and loved ones or just hold close to our hearts. Once when my parents were going to a Christmas party, I was told emphatically to not touch the Christmas tree that had just been partially decorated. I must have been about 10 years old. The star had not yet been placed on the top and that bothered  me. “I could surprise them,” was my thought. As soon as they drove out of the driveway, I stood on one of those Southern Craftsmen ottomans that was not too sturdy and a little bit off balance.  Guess what?  I fell and broke my arm! I remember my babysitter being one of the Powell teenagers, Ab Powell’s sister. She couldn’t help it! I screamed and hollered until they came home at which time I had to “face the music.” No Christmas carol playing on the piano that year!

Back then, it was a dream for children to get bicycles from Santa. Guess it still is! Those bikes down at the Western Auto store were the shiniest. This was way before Walmart.  Parents could tell Santa to stop by there and make sure the bike came with a basket, a red reflector, and even a bike tag with the year. An Annie Oakley cowgirl suit with a cowgirl hat, a gun and holster to go with it was the ideal. There were lots of sidewalks and quiet city side streets to ride on in those days. Santa came through! My sister’s bike had training wheels. (That big girl bike is now down at the Three Notch Museum, by the way!)

The most precious memories of the 50s of mine centered around the little children’s choir at the First Presbyterian Church where Anne Long Albritton (Mrs. Bill) was the director. At the annual Joy Gift service, the children wore white robes with red or green or purple collars that she had sewn herself. The angels, the younger ones, wore white robes with tinsel halos. One of those halos is still in my upstairs Christmas closet. No, I don’t throw memories away! Mind you, I was not the angel – my sister was!  The closest person to an angel I ever knew was Mrs. Albritton, long-time organist at FPC, piano and violin teacher, too. She is now leading one of those heavenly choirs singing at Jesus’ feet in “Away in a Manger!”

Here’s hoping that your old memories are precious during this Christmas season. It is not too late to make new memories that will last so one day you can experience the pleasure to Remember When your family celebrated the reason for the season!

When you readers are perusing this column on Saturday, I will be creating this year’s gingerbread house.  Let me encourage you to put on your musical Christmas CD; bake your cakes and cookies,: make your peanut brittle, fruit cakes, divinity, fudge; attend your church’s Christmas cantata and sing the carols; hang your wreath; decorate your tree if you are able; display your manger scene; visit the lonely and bereaved; and Remember When the baby Jesus was born. “Be near me, Lord Jesus, I ask you to stay, close by me forever and love me, I pray. Bless all the dear children in thy tender care, and take us to heaven to live with Thee there.” Merry Christmas to you and yours!

Remember when: Count Darling, Albert Rankin, and how ‘Bear’ got back to ‘Bama

Been savin’ this story for the week of what has been traditionally called “The Iron Bowl.” It’s an old story... read more