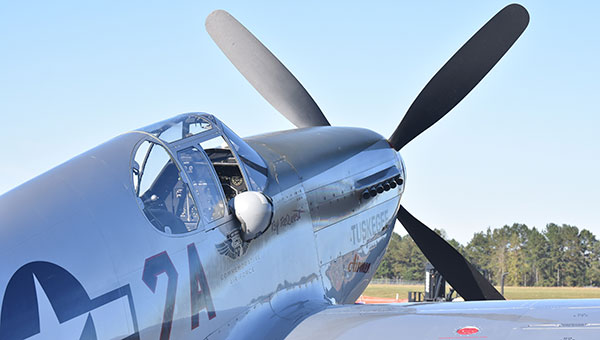 “We knew that we would spend more than we raised for this airshow,” Blackwell said. “So the difference comes from our general funds.”

The airport’s general fund is funded primarily from fuel sales.

“None of the difference came from the county or the cities’ money,” Blackwell said. “We knew going in that we would be spending around this much, so we went ahead and started saving.”

The City of Andalusia, City of Opp and Covington County each have debt associated with economic development projects at the airport. When the airport receives lease payments for those properties, the payments are prorated to the three entities.

Blackwell said that if they had charged admission to the airshow, they could have made that difference up without having to spend money from the general fund.

“I think the fact that we did it for free is what kept people coming in the gates,” Blackwell said. “I think taxpayers get a feeling of what they are getting with their money that they spend.”

He said that one of the biggest contributions that helped for the airshow was the funds that the county and city allowed the airport to keep for the month of October.

“We couldn’t have done it without that contribution,” Blackwell said. “That money was very well spent. Most of that money went back into the community.”

The final attendance estimate for the show is 8,100.

“We counted 8,100 people inside the gates of the airport,” Blackwell said. “Within that, about 10 to 15 percent were people from outside of the county. People that were buying our food, staying in our hotels and buying things in our county.”

Blackwell said that the only negative thing that he heard about the airshow was people asking why they waited so long for the airshow.

• Voted to reinstate board officers.

• Considered an airport safety plan and airport organization that changes board meetings from monthly to every other month.

• Approved an airshow/Christmas bonus for the airport staff.

• Approved a three percent raise for the employees.

Luke Ritter of Troy was the fastest runner in Saturday’s Candyland Christmas Half Marathon, finishing the 13.1-mile course in 1:29:44,... read more