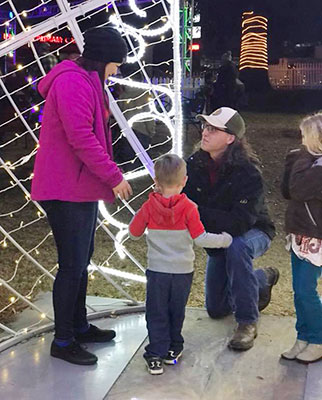 Wesley Gibson proposes to Jessi Davis Friday night at Candyland in front of friends and family members, including his three children.

Couple gets engaged at Candyland

This year’s Christmas in Candyland offers more than ever – train rides, imaginative play, ice skating, a maze, and  an augmented reality app.

But Friday night, it was the backdrop for an old-fashioned wedding proposal when Wesley Gibson dropped to his knee and asked Jessi Davis to be his bride. 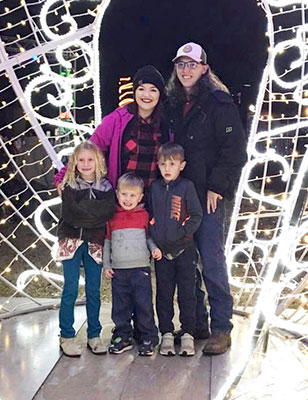 Wesley Gibson and Jessi Davis Friday night at Candyland, with his children, Ava, Bentley and Collin.

“I knew he had bought a ring, but I hadn’t seen it, and I thought he was going to wait until Christmas,” Davis said. “My best friends were with us, and we had five kids running around we were chasing. We had a really good time.

“Right before we left, one of my friends said, ‘Let’s go back over to ornament where everyone’s taking pictures. No one’s in there.’ ”

Earlier attempts had proven madhouse, so the entourage went back to try it again.

“Wesley kneeled down, and I thought we were kneeling for the picture,” Davis recalled. “I was trying to sit on his knee. Then he tapped me, and when I turned around, he was popping the question.”

Friends and family members were joyous.

“He has three children, and I love them very much,” Davis said. “They were there and all of my friends were there. His little girl was jumping and giggling and the middle child was happy. The little one was too tired to really know what was happening.”

Davis is a Brantley native who moved home in January after working for several years in Pensacola. She works at That Place salon.

Gibson works at The Pursuit Channel in Glenwood, and is a student at LBW, with a goal of becoming a paramedic.

The couple plans an August wedding.