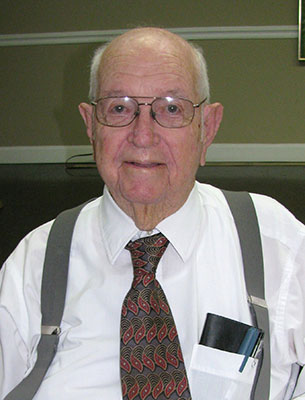 Waits graduated from Andalusia High School in 1942, and earned a debate team scholarship to the University of Alabama in Tuscaloosa. Like most male members of the freshman class, he joined the Enlisted Reserve Corps that December.

In a record of Waits’ military history, John Vick wrote, “They were activated in February, 1943 and sent to basic training in Indiana. After basic, Sidney was sent to finance school where he learned military pay and record keeping. Upon completion of school, he was sent to the Panama Canal Zone by way of Guantanamo Bay, Cuba.

“In the Canal Zone, he was attached to Ft. Kobbe, which was a joint Army and Army Air Corps base. Howard Field was the Air Corps part of Ft. Kobbe where Sidney was stationed. Their job was to protect the Canal from air attack. He said that standing guard duty around the fuel depot there, was the closest he came to the war.”

His primary job in the finance office was to see that the soldiers were paid.

When he returned from war, he took over his father’s business, fellow local historian Sue Bass Wilson said. Later, he worked for Anderson Peanuts.

He was a founding member of the Covington Historical Society, Wilson said, and he was instrumental in securing the Central of Georgia Railroad Depot to house the museum.

In 2012, he was recognized as an Andalusia High School Outstanding Graduate.

His nominator, Suan Riley Salter, wrote, “Sid’s enthusiasm for local history and the preservation of it should interest, challenge and motivate students and adults.

“His efforts on behalf of the Three Notch Museum are exceptional. These items of istory might have been destroyed had Sidney not pursued those who had authority to donate historical buildings, railway boxcars, and cabooses” to the Covington County Historical Society.

In a letter supporting the nomination, Joseph C. Wingard wrote, “His loyalty to his alma mater has extended over a lifetime, as has his faithfulness to First Baptist Church and the Covington Historical Society.”

He also authored 11 books and pamphlets, many of which are available for purchase at the Three Notch Museum.

His wife, Polly Wilder Waits, preceded him in death. He is survived by two children, 10 grandchildren, and six great-grandchildren.

The 2nd Annual Red Nose Reindeer Dash 5K Run/Walk will be held on December 15th.  All proceeds will go to... read more