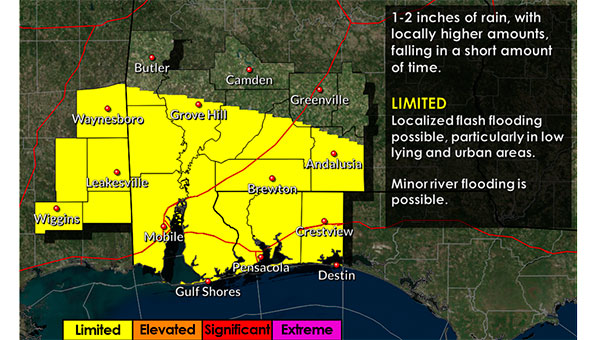 According to the Covington County Emergency Management Agency director Susan Harris, there is a marginal risk of severe weather, heavy rainfall and a flood threat this evening.

“We continue to monitor a system which will move across our area later this week,” Harris said. “This will be an event similar to the last few that we’ve had, a low-end risk of severe storms along with the potential for heavy rainfall/flooding. The timing will be from late Thursday afternoon through Thursday night.”

Harris said that forecasters predict one to two inches of rain.

“We are expecting one to two inches of rain with locally higher amounts to fall in a short amount of time as a line of heavy rain and storms shifts eastward across the area,” Harris said. “A limited threat of flooding continues for much of our area. However, please note that areas that received heavy rains on Saturday, Dec. 8,  could see an increased elevated threat in later updates. Currently there is ongoing or forecast minor flooding along some portions of the Alabama and Tombigbee rivers. However, this additional rainfall could result in minor flooding along creeks and rivers generally in the western Florida panhandle.”

Harris said that the heaviest rainfall is expected Thursday afternoon.

Harris said that an isolated severe storm or two will be capable of producing localized damaging winds and possibly an isolated tornado in the marginal risk area.

“The severe weather will begin first over southeast Mississippi late Thursday afternoon,” Harris said. “Then over the remainder of the marginal risk area through Thursday night.”

Area non-profits got a collective $27,000 boost in revenue from the Andalusia Health Services Inc. board Tuesday in a contribution... read more