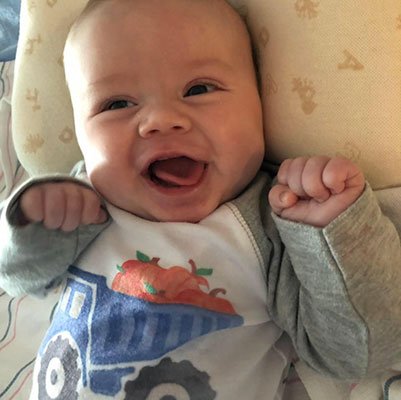 The Straughn Elementary School Christmas Service Project is nothing new, but this year, SES second grade teachers and students are raising money for a cause that hits close to home. 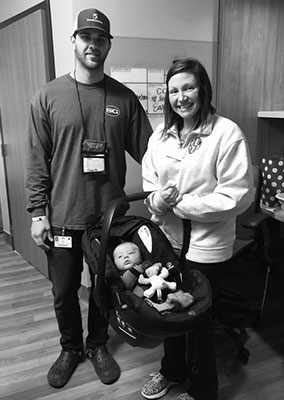 Noah and Kimberly Studstill are shown leaving the hospital with baby Easton after his heart surgery.
Courtesy photo

“I thought that it was a stomach virus,” Studstill said. “But he was having some other issues as well so I called his pediatrician. Dr. Bang met us at the hospital just to look at him and wanted him to stay overnight for observation.”

Studstill knew that something was wrong when she looked into her son’s eyes.

“A CT was ordered and that is when they found the stroke in his brain,” Studstill said. “We left there and went to Sacred Heart where a tumor in his left ventricle was discovered.”

After the doctors found the tumor, they flew Studstill’s son to UAB.

“We stayed in ICU until his seizures were under control and they came up with a plan for surgery,” Studstill said. “He had open heart surgery on November 26 to remove the mass. Easton was the first patient the three surgeons had seen with a mass on the left ventricle.”

The tumor was diagnosed as a myxoma tumor, which is benign, but there was a tear in the mitral valve during surgery, Studstill said.

“A part of his mitral valve tore during surgery, but they’re hopeful it will heal when he gets bigger,” Studstill said. “That way we can avoid another open heart surgery.”

The family has been home since Nov. 30, and Studstill said that Easton is doing great.

The second grade teachers at SES wanted their service project to be for the Studstill family because they said that they are family.

“I mean she is our coworker,” Samantha Windham said. “We are all like family.”

Instead of exchanging gifts, the students and teachers have been raising money, and second grade teacher Lori Jackson said that her students are more worried about the Studstill family than receiving gifts.

“I haven’t heard one negative comment about not receiving gifts,” Jackson said. “They are more concerned about what’s going on with the Studstill family than thinking about what gifts they would have received.”

The second graders have learned about generosity this past week by reading “Rosa and Blanca,” Crystal Nelson said.

“We are trying to incorporate a sense of generosity and kindness into our curriculum,” Nelson said. “By the stories we hope that they will learn how to be kind to others.”

The second graders will present the money that they have raised to the Studstill family today at the school.

“This community rallies around any kind of needs that our area and other areas have,” SES principal Bettye Anne Older said. “The Straughn community really has the biggest hearts. We understand family, we understand community and we certainly understand when something bad happens. We all go through our own tragedies.”

Older said that she can feel the Christmas spirit when the kids talk about their service projects.

“It is an incredible thing for children to learn service learning in school,” Older said. “You have got to feel Christmas in your heart when you hear what these children are doing for others. These folks really just have the biggest hearts and love for each other.”

The other grades that are participating in the service project are Kindergarten, third grade, and fourth grade.

Caring for people led her to nursing