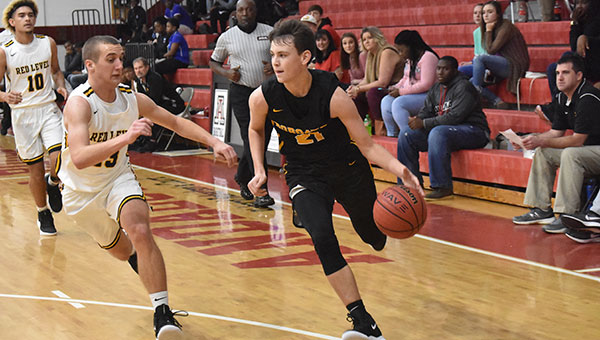 Opp holds on for 3-point tourney win over Red Level

The Opp Bobcats finished the 52nd Annual Andalusia High School Christmas Invitational tournament with a 2-1 record after knocking off Red Level 52-49 on Saturday in Andalusia.

Bryan Matthews got Opp up 2-0 early with a pair of free throws and then Logan Ross dropped in a 3-pointer to extend the lead to 5-0.

Red Level got on the board when Joel Phillips picked up a layup off of an assist from Matthew Coleman.

A few minutes later, the Opp took an 8-3 lead with a baseline lay up from B. Matthews.

Red Level inched back in the game on a bucket from Cody Kelley, but Opp’s River Day answered with a 3-pointer to give the Bobcats an 11-5 lead.

Opp closed out the opening period with a couple of baskets from Harold King and Erik Matthews to put them up 16-6 heading into the second period.

Red Level got a couple of free throws from Phillips to start the second, but Day followed with another 3-pointer to stretch Opp’s lead to 19-8.

Red Level battled back with a bucket from Kade Green and then four-straight free throws from Chance Russell and Jacob Catrett cut the Opp lead down to 21-16.

However, Lane Ballard dropped in two 3-pointers down the stretch to put the Bobcats up 31-18 at halftime.

In the third period, the Tigers came charging back into the contest.

Green buried a big 3-pointer and a layup from Russell allowed Red Level to cut Opp’s lead down to 39-36 heading into the final frame.

Russell got things started with a bucket in the fourth period to bring Opp’s lead down to 39-38.

Opp responded with a basket from E. Matthews and then a 3-pointer from Ross put Opp up 44-38.

Russell converted an and-one opportunity with 12 seconds left in the game, but Opp was able to hold on for a 52-49 win.

The Andalusia Bulldogs put up a strong fight, but fell 55-53 on last second shot to the Flomaton Hurricanes on... read more