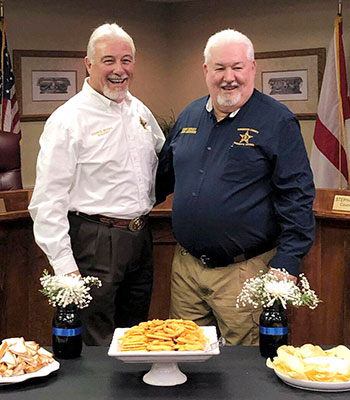 Anderson retiring after 40 years as LEO

After almost 40 years of dedicated service to law enforcement, David Anderson is retiring to live what he hopes will be a life full of fishing trips and “listening to my wife.”

Anderson’s passion for serving the community came at a young age, when he was 16 he began as an EMS.

“After working hand-in-hand with law enforcement and seeing my father go through the academy, I started to have an interest in it too,” he said.

Anderson and his father served alongside each other at the Andalusia Police Department.

From there, Anderson went on to work in McKenzie, the old county jail and in 1992, he was the chief of police for the Red Level Police Department.

Anderson said that’s where he learned a lot.

“In Red Level there were no special units, so you had to do just about everything,” he said. “Back then, you could really get out and police without having to worry about social media. There were no restrictions on your ability to do your job.”

While serving as the Red Level chief of police, Anderson worked closely with Dennis Meeks.

“I served 15 years over in Red Level when Meeks asked me to be his chief deputy if he ran for sheriff,” he said.

It’s been 12 years since Anderson began as chief deputy and if there’s anything he will miss, it’s the people.

“I’m going to miss all the friends I made in almost four decades of law enforcement,” he said.

“I’m going to miss having the opportunity to talk to and speak with them everyday. As well as help them out with cases.”

If there’s one thing Anderson has liked about serving with the Covington County Sheriff’s Office it’s that there’s a larger staff of amazing workers.

“I have worked with some of the finest officers in Alabama.”

Anderson’s favorite aspect of his job was interacting with the public and speaking to people.

“I just have built up a good rapport with the people in this area and I genuinely love the people,” he said.

Anderson said that in his retirement he will spend time with his wife, Linda, fishing, golfing and watching Alabama football.

He was honored with a retirement reception yesterday in the county administration building.

Some express service available for last-minute gifts Santa’s helpers at Pack-N-Ship say the window is very narrow for getting gifts... read more