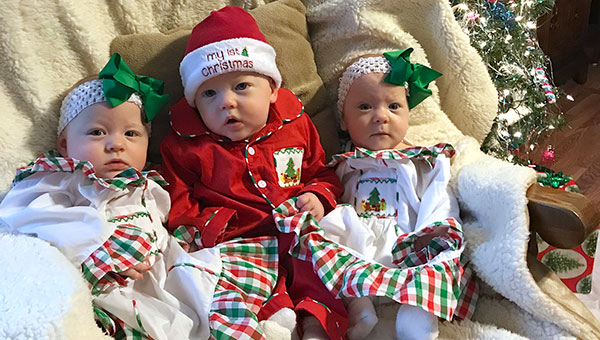 Sonja Godwin spends most of her days making life better for senior citizens as director of the Andalusia Adult Activity Center.

But she’s spending her Christmas break – and most of her weekends – with a much younger set.

Marlana said it takes a village to care for three babies.

In June, Godwin became “MiMi” to triplets when her daughter and son-in-law, Marlana (nee Raines) and Marlin Hanner, welcomed three babies into the world.

The Hanners live in Elberta, but are home visiting for the holiday.

Mrs. Hanner was 8 weeks into her pregnancy when she learned there would be three babies. She spent the next 20 weeks and four days preparing.

“We were really lucky,” she said.

The couple was gifted with many of the items they needed for the babies, and had shopped consignment shops to get ready for multiples.

“We had showers where all we received were diapers and wipes,” she said.

“I am not a procrastinator,” Mrs. Hanner said, adding that while she never dreamed she was having contractions and would be hospitalized at a weekly appointment, she was ready for the babies.

She also had spent lots of time joining social media groups for moms of multiples, and worked with a counselor and USA Women and Children’s Hospital.

She was hospitalized for a week before the babies were born, and remained at the Ronald McDonald House until all three could go home with her. Kalylah Jo was discharged first, followed by Jaxson, with Elana Belle being released at 3 months.

“I couldn’t be away from any of them,” Mrs. Hanner said. “So I just stayed at the Ronald McDonald House. Someone in the family would come there and stay with the first two, while I went to visit in the NICU.”

These days, she says, she depends upon a small village to help her with the babies. The babies eat every three hours, beginning at about 6 a.m.

Marlin Hammer is a police officer, and Marlana Hammer works for the Baldwin County Board of Education. She is able to be away from her job for a year, she said.

For children who are wondering if Santa is traveling safely, there’s no need to worry. The North American Aerospace Defense... read more