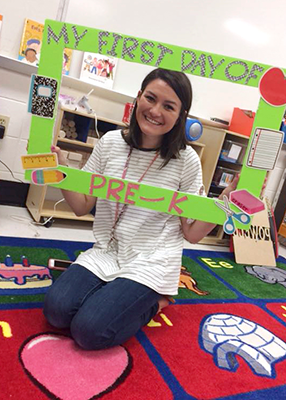 Pre-K teacher Victoria Wilson is shown on the first day of the program at Fleeta in August.

Local educators say they aren’t surprised by new research that shows Alabama’s First Class Pre-K program benefits students over the long term with no signs of “fade out.”

The First Class Pre-K Research Evaluation Team, which includes researchers from the UAB School of Public Health, UAB School of Education, and the Public Affairs Research Council of Alabama, conducted the study.

In the study, students who attended First Class Pre-K were significantly more proficient in math and reading in the third through seventh grades than students who did not. The results of the study also showed that these long term results held true even after controlling for factors that have been shown to impact student outcomes, including poverty, ethnicity and time.

“In Alabama, we have tried everything that we can think of to get our kids to graduate and to not end up in jail,” Superintendent of Andalusia City Schools Ted Watson said. “There are a few things we haven’t tried as far as bringing up a healthy kid, but there is one thing that we are sure of that will work is an early education.”

Watson said that the cost of the early schooling does not outweigh the prosperity of children’s’ futures.

“It cost a little bit of money for Pre-K,” Watson said. “But it is the price you pay to ensure your kid’s future.”

Opp City Schools Superintendent Michael Smithart agrees that the earlier the teaching, the more prepared the students are for the future.

“We are very fortunate to have as many Pre-K programs as we do in Opp,” Smithart said. “I really think the earlier that we are teaching kids these skills, the better the more prepared they will be for the future.”

Fleeta School, which is a part of the Covington County School System, recently started their first Pre-K program and Superintendent Shannon Driver said that it has helped several kids.

“The Pre-K curriculum definitely helps kids to read at an earlier age,” Driver said. “The state doesn’t begin testing children until the third grade, so I feel, now, with all of our schools having a Pre-K program, we will improve across the board as a school system because of the skills that these preschoolers are learning at an early age.”

Willie Thomas, the founding director of Andalusia’s Bright Beginnings pre-school, has spent several years documenting the advantages of having a Pre-K program.

“It gives the kids a great start,” Thomas said. “It gives them a chance to play with other kids, a small setting to learn in and chance to learn good information at an early age.”

While Thomas was director at Bright Beginnings, every single student who went through the program graduated high school.

He said that by having two years at Bright Beginnings, students had the opportunity to concentrate on the core subjects.

“Now you have to know how to read and write your name before you go into kindergarten,” Thomas said. “Several kids who went to kindergarten first actually came to Bright Beginnings to learn how to read.”

According to the National Institute for Early Education Research, Alabama has the nation’s highest rated Pre-K program for quality. The state has maintained that high quality rating while trying to grow access to the program. Recent funding investments have expanded First Class to 1,045 classrooms serving almost 19,000 students statewide, or 32 percent of the eligible population.