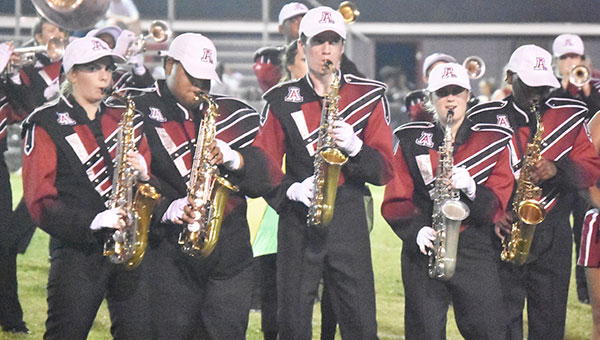 Andalusia High School’s A Sound Tradition has been hard at work this past week preparing to participate in Monday’s inaugural parade for Gov. Kay Ivey.

The band was officially invited on Jan. 2, while students were on holiday break. Band members practiced all week, and will perform “God Bless America” in the Montgomery parade, band director Benny Shellhouse said.

For those travelling to Montgomery for the inaugural events, the swearing in ceremony begins on the Capitol steps at 10 a.m.

There will be another Andalusia tie to the inauguration there, as Rep. Mike Jones, R-Andalusia, who also is a municipal judge, will administer the oath of office to Secretary of State John Merrill. The two formerly served together in the House of Representatives.

The parade, which begins at noon, will roll up Dexter Avenue to the Capitol, turn left, and end at Cramton Bowl.

Shellhouse said the band buses will park on Bibb Street and walk to Perry Street, where they will be staged until the parade begins.

After the parade, the group will assemble for an official photograph at the Capitol.

For a history of AHS’s participation in inaugural parades, see “Remember When: Monday won’t be 1st time band witnessed history.”