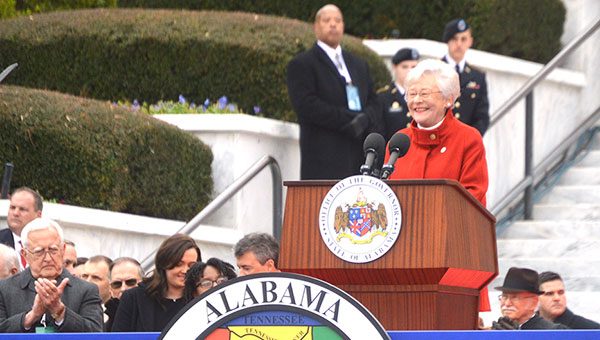 Gov. Kay Ivey called for increased funding for the state’s infrastructure in her inaugural address yesterday.

“Today, I follow in Governor Lurleen Wallace’s footsteps in many ways and make the same ask to the members of the Alabama Legislature,” Ivey said. “After all, if we want to compete in a 21st century global economy, we must improve our infrastructure by investing more in our roads, our bridges and our ports. Improving our infrastructure is more than an investment in our roads and bridges; it’s an investment in economic development, public safety and local communities.”

Legislators said last week that Ivey wanted a “reasonable increase” in the state gas tax to fund road and bridge repairs, but to date, she has not publicly asked for a specific amount. She did not ask for a specific increase on Monday, either.

“It has been nearly three decades since we last made any changes to our current funding, and the challenge has grown with the passing of time.” Ivey said. “Now is the time to increase our investment in infrastructure – now is the time to solve this problem! We will have only one chance to do so. With the people’s help – and the support of the Alabama Legislature – I am confident we will do the right thing.”

The governor called for bipartisan support of the initiative, and also said the state has to give attention to its prison system.

“Much like our roads and bridges, our prison system, too, has been sorely neglected for decades,” she said. “The poor conditions of our prisons create a risk to public safety and are placing a heavy burden on taxpayers.”

Ivey said she hopes progress in these areas “will inspire us to tackle other pressing challenges, such as health care, rural economic development, access to broadband and other important issues.”

“With your help – and with God’s amazing grace – the next four years will not only mark the beginning of our third century, they’ll be the foundation for our best years to come,” she said. “May God bless each of you. And May God continue to bless our Sweet Home Alabama!”

Platform guests at the inauguration included former Govs. Jim Folsom Jr., Don Siegelman, Bob Riley and Robert Bentley. Former Speaker of the House Seth Hammett also was a platform guest, as was Rep. Mike Jones, who in his capacity as a municipal judge, administered the oath of office to Secretary of State John Merrill.

Members of the Andalusia High School band got to be a part of history as they marched up Montgomery’s Dexter... read more