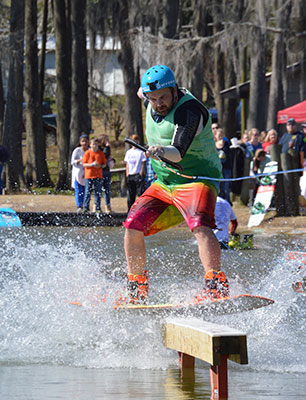 Cancer Freeze began as a cold-weather water skiing dare, but has grown to include numerous and year-round activities. File photo by Josh Dutton

Cancer Freeze organizers are hoping for another successful year after increasing the amount of money raised again last year.

“This will be our 13th year,” Cancer Freeze co-founder Jennifer Davidson said. “In 2018 throughout the whole year we were able to give $147,000 to 41 different families. All of that isn’t money though; it may be gas cards, insurance or paying their light bill. Anything that they need we provided.”

Cancer Freeze started as “Freezin’ For a Reason” when founder Caleb Davidson challenged his friend Brad Norris in November 2006 to water-ski in cold water. The first Cancer Freeze was held in 2007 and each successive year it’s gotten bigger.

Yesterday, there were 150 people already signed up for the 5K, which takes participants around Lake Jackson.

This year’s auction, which begins at 1 p.m., Saturday, has several unique items, including Allen’s Southern Made Picnic Tables, a stroller blanket and pillow made by Margaret Merckle, a wood painting donated by the Florala Pharmacy, a wooden bowl handmade by Cindy Barrineau, a desk drawer donated by Southern Windows and Doors in DeFuniak Springs, a knife made by David Fleming with a case signed by the Choot ‘Em Alligator hunting family the Landry’s, several metal sculptures, handmade quilts and much more.

“We are still hoping to have more people bring auction items the day of,” Davidson said. “But we have so many great items already.”

Davidson said that volunteers are going to be hard at work this week trying to get things in order for the event.

“Our list is long and the days are short,” Davidson said. “But it will all come together. We will be on WAAO radio station next week to promote the event. We just have a lot of errands to run and make sure we load all of our stuff up in the trailer.”

Not much has changed in the event, but Davidson said that there are a couple of new vendors.

“We have some new vendors, but everything else is pretty much the usual stuff,” Davidson said. “We have new mascots for Cancer Freeze this year as well, a penguin and a couple polar bear, so we are really excited about that. Everything else will be the same. We will still have the fishing tournament, auction, car show and 5K.”

As of Friday, the forecast for Florala next Saturday is a high of 54 degrees, which means participants shouldn’t be freezing.

Davidson said that the turnout will most likely be determined by the weather.

Though they do raise money, Davidson said that isn’t the reason she and her husband organize Cancer Freeze.

“I think the best thing about Cancer Freeze is just everybody coming together,” Davidson said. “Regardless if they know that recipient personally or not, it’s just about coming together in our beautiful little town and just saying we are here to support you. The truth is, it’s not just about those six people on that poster. There are several people that will be there that day, that have walked that same walk before.”

Davidson said that their main goal is to reflect Christ’s love.

“We pray that people see Christ through us,” Davidson said. “Because it is not about us. It is about what he has asked us to do. We feel like this is the mission that God has given us.”

Baldwin picked for All American Games

River Baldwin is the only Alabamian who made the women’s roster for the 2019 McDonald’s All American Games. The rosters... read more