Ready for Valentine’s? All chocolate’s not created equally 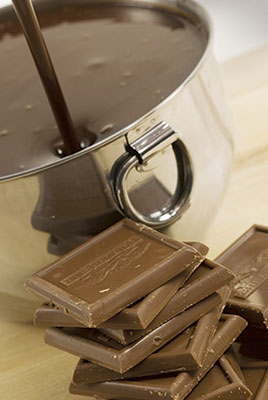 Valentine’s Day is a popular time to indulge in sweets. In fact, according to Nielsen, more than 58 million pounds of chocolate candy will be sold during the week of Valentine’s Day.

Chocolate wasn’t always the sugar-sweetened dessert people consume today. The history of chocolate dates back to 1900 BC, when Aztecs believed the cacao seeds were the gift of Quetzalcoatl, the god of wisdom. Chocolate was made into fermented beverages, and the cacao beans also were used as a form of currency because they held so much value.

According to the History Channel, some ancient civilizations considered chocolate to be a mood enhancer and aphrodisiac. Chocolate was believed to have mystical properties and was revered so much that it was reserved for rulers, warriors and priests.

It was not until centuries later that edible chocolate became popular among the masses. Dutch chemist Coenraad Johannes van Houten invented the cocoa press, which could turn extrude cocoa butter, paving the way for the modern age of chocolate as a confectionary ingredient and gift.

Choosing the right type of chocolate may require gaining an understanding of various chocolate-related terms.

• Cocoa powder: This is the unsweetened raw form of cocoa made from partially defatted chocolate liquor. Dutch-processed (alkalized) cocoa powder is milder and less acidic than natural cocoa powder.

• Dark chocolate: Chocolate that contains only chocolate liquor, sugar, cocoa butter, vanilla, and lecithin is considered dark chocolate. No milk solids are added in. The higher the percentage on the wrapper, the more bitter the chocolate.

• Bittersweet and semi-sweet: These chocolates are milder than dark chocolate, but not as sweet as milk chocolate. Many chocolate manufacturers derive their own formulations for these types of chocolate, varying the amount of cocoa solids they include.

• Ganache: Ganache is a whipped filling, glaze, icing, or sauce that is used in various desserts. It is made by heating cream and pouring over chocolate of any kind.

• Truffle: A chocolate truffle is made from a ball of ganache rolled in cocoa powder. Truffles can be made from any variety of chocolate.

Chocolate is a favorite on Valentine’s Day, making it a perfect gift or dessert.