Remember When: The Charles Brooks Story 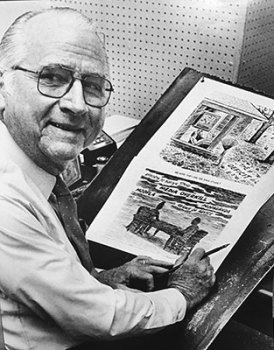 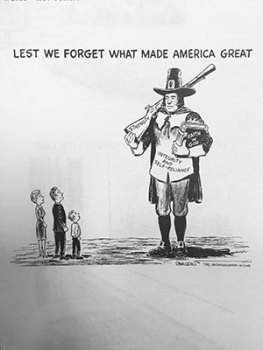 One of my favorite stories to tell to school children at the Three Notch Museum when school groups tour is about a boy who grew up at 207 Rankin Street and who went on to experience great success in life. Charles Brooks was his name. He was graduated from Andalusia High School in 1939. His artistic talent was quite evident all the way through school.  In his high school years, he was Art Editor of the Memolusia yearbook and the school newspaper, the Andy Hi-Lite.

From the Spring 2004 edition of the Alabama Heritage magazine, I found a feature article:  “Alabama’s best-known political cartoonist of the twentieth century is Charles Brooks of the Birmingham News. Born in Andalusia, Alabama, Brooks enrolled at Birmingham-Southern College in 1939 applying two hundred dollars won in an art contest toward his tuition.”

“As his interest in political cartoon art grew, Brooks left Birmingham-Southern to study at the Chicago Academy of Fine Arts with Chicago Daily News cartoonist Vaughn Shoemaker, a two-time Pulitzer Prize winner. After serving in the military during World War II as a demolitions expert and road builder on the beaches of Normandy at D-Day and later the Battle of the Bulge, Brooks worked drawing gag-cartoons for a Chicago advertising agency. In 1948 he returned to Alabama and was hired by The Birmingham News as the paper’s first editorial cartoonist.”

Related story: In 1959, a grisly murder captivated Alabama’s imagination. Charles Brooks sketched the victims, then later learned they were from his native Covington County.

“Over the course of his 39-year career, Charles Brooks provided commentary on ten presidential elections, eight presidential administrations, the Cold War, the Civil War movement, the Vietnam War, and Watergate, as well as state and local politics.”

Over the years, his cartoons which covered subjects such as God and Country, The Family, Defense, Free Enterprise, Education, Local Problems, Politics, and Alabama, A Great Place to Live, and others received numerous awards including the Sigma Delta Chi prize for the most outstanding editorial cartoon in the nation in 1959, 13 Freedom Foundation Awards, a national VFW Award.

“Presidents and governors and other dignitaries have asked him for originals of his cartoons which lauded or lampooned them (mostly the latter).”

James E. Jacobson, former editor of The Birmingham News wrote, “The greatest tribute to him was not national acclaim or recognition, but the loyal readership of hundreds of thousands of average, hard-working, vote-casting citizens who followed his work for nearly four decades in Alabama’s largest newspaper and who were influenced by it.

In Charles Brooks’ “Best of Brooks” book written in 1986 and edited by his son Charles Brooks, Jr. (Ph. D.), the father Brooks wrote “I looked forward to Saturdays. After breakfast, I would go to my room and spend most of the day drawing. I filled many notebooks with my own comic strips and with drawings of sports figures. I also made larger drawings of World War I scenes, airplanes, animals, etc. – anything that struck my fancy. I was in ‘hog heaven’ on those Saturdays. My mother was always helpful in seeing that I got any art supplies I wanted. She understood my love of drawing and always believed that one I would make a living using this God-given talent. Dad was not so sure. He thought I was dreaming the impossible, but he changed later when he saw that I did not plan to give up.”

Here is the inspiring story that catches the attention especially of the students who visit Three Notch Museum. It is told by Charles Brooks in his book, “Best of Brooks – 38 Years of Cartoons.” It tends to encourage those children and teenagers who aspire to greatness even though they are from a small town with humble roots!

“When Walt Disney died in 1966, I took special pains to honor the man who brought so much joy to so many. I spent more time on this cartoon than on any other. My cartoon for the next day was almost finished when I heard of Disney’s death around noon. After getting the idea for the Disney cartoon, I went down to a second-hand book store and searched through stacks of comic books to find as many Disney characters as possible.”

“I returned to my drawing board and started the cartoon around three o’clock that afternoon. I was able to fit 14 of his characters into the drawing and didn’t finish it until around eight o’clock that night. Two or three starts that didn’t suit me were thrown away before I got just the one I wanted. Walt Disney is someone very special to me, and I wanted the drawing to be the best I could do!”

“Of all my cartoons, this one has been the most popular. The Birmingham News made thousands of reprints, and requests for copies came from all over the United States. The Disney family asked for the original which was added to a collection in his memory and hangs in the Disney studios in California.”

Brooks’ son wrote, “He taught us kids the value of education and hard work. ‘Whatever you do,’ he used to say, ‘do it the very best you know how.’ My dad was honest, upright, devout, principled, thrifty, and brave. He sincerely and unabashedly believed in truth, justice, and the American way. He was the John Wayne of cartooning. He set the example of being the best cartoonist and the best dad. You couldn’t ask for a better teacher, companion, pal, and guide through life than my dad. He was the epitome of the American father as portrayed in the family tv shows of the 1950s and 1960s like the families in ‘Ozzie and Harriet,’ ‘Leave it to Beaver,’ and ‘Father Knows Best.’ The Brooks family was like that.”

Not so amazing was the fact that Brooks gave a lot of credit in part to his teachers at Andy Hi who strengthened the basic beliefs his parents had taught him – honesty, integrity, and dependability – namely Miss Clyde Simmons and Mr. James Arthur Wilson.

“Mr. Wilson,” Brooks stated, “remarked at a class reunion I attended years later that ‘each person we have known becomes a part of us. We are sort of a composite of all those who have helped us along the way.’” Brooks believed that.

“Miss Simmons in teaching English and literature made English come alive. She helped me learn to express my thoughts in writing and opened up the wonderful world of books for me.”

“Over those 38 years, Brooks’ collection of cartoons took the readers on a long walk through the pages of recent history daily as it happened,” Jacobson concluded in his Foreword to Brooks’ book.

In the fourth grade, Charles Brooks won first place in a contest at East Three Notch School for the best book jacket design. It was put on display on the sidewalk showcase of Benson Hardware. Teachers found out about his artistic ability in the first few grades. They would get him to draw displays for seasons and holidays – turkeys, wise men, camels, pilgrims, and manger scenes. The family knew he had inherited his love of drawing from his maternal grandfather, Charles W. Smith, after whom he was named.

A boyhood dream, yes it was – to be an artist by profession, to live in the South, to have a family, to land a job with The Birmingham News. It all came together for Charles G. Brooks whose roots were firmly planted in his beloved Andalusia.

Sue Bass Wilson, AHS Class of 1965, is a local real estate broker and long-time member of the Class of 1965. She can be reached at suebwilson47@gmail.com.