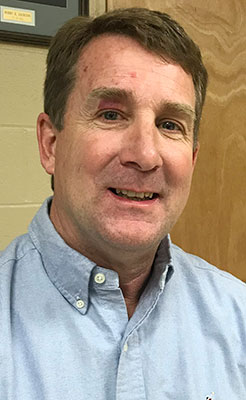 Toby Greene will take the helm of Florala football in April. He currently coaches in Dothan.

The Covington County Board of Education on Tuesday named Toby Greene the new head football coach at Florala High School.

FHS Principal Max Whitaker recommended Greene to the board.

“When I was at Geneva County and moved into administration, Toby took my place as head coach at Geneva County High School,” Whitaker said. “We’ve been friends since then. He’s got a lot of good experience.”

Greene, who currently is an assistant coach in the Dothan City Schools system, said he sees Florala as a town that “really loves and supports its schools.”

He said he currently is in a big system where that isn’t necessarily the case, and he’s eager to get back to a smaller environment.

“I was taught to coach ‘em like they’re your own kids,” he said of his coaching philosophy. “I try to be positive with kids, build them up, and get them to do something they didn’t think was possible.”

Greene said he was impressed with the program.

“Coach Mason has done a good job getting it moving in the right direction,” he said. “I’m excited to get back into it and be a head coach again.”

A native of Vincent and Harpersville in Shelby County, Greene graduated from the University of Montevallo. He was an assistant for Don Creasy and Joey Jones at Mountain Brook prior to becoming the head football coach at Rehobeth in 1999.

He has held head coaching jobs at Rehobeth, Muscle Shoals, Cottonwood and Geneva County. His longest tenure was at Cottonwood, where he amassed a 60-39 record in nine season and went 5-4 in the playoffs. In2007 and 2010, his teams had 12-1 records. Overall, he is 96-86-0 as a head coach, according to the Alabama High School Football Historical Society.

He has 25 years experience in education, and 17 years of coaching experience.

Lucas Denney and his cousin, McKennon Denney, have a goal of opening the only video game shop and arcade in... read more