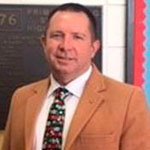 Current BES Principal Anne Lambert will retire at the end of the school year.

BCS Superintendent Dr. Kenneth Varner said he was excited to announce that Woods is the new principal and that Straughn’s data rivals and sometimes exceeds BES’s data.

“Mr. Wood is a member of the U.S. Naval Reserve and is currently on a two-week deployment in Spain,” Varner said. “He is a recognized leader within the military who has achieved the rank of E-8, senior chief petty officer.”

Varner called Wood a student of leadership and said that Wood’s primary responsibility is to build and cultivate leadership within the ranks.

On the educational front, Varner said that Wood has a sound understanding of instructional pedagogy and that he loves analyzing data and uses it to make informed decisions.

“He has a sound understanding of instructional technology and what that should look like in an elementary setting,” Varner said. “He is a strong disciplinarian but takes great pride in pointing out that he works hard to develop relationships with students and that no student is afraid of him.  He is a problem solver, and he possesses the requisite skills and experience to deal effectively with any situation that may present itself.”

Wood serves on the AdvancED Accrediting Council for the State of Alabama as a board member and visited the system last year for accreditation.

He has taught in the Opp City School system as well as the Covington County School system, where he served as assistant principal at Red Level Elementary School from 2012-12 before a deployment to Kabul, Afghanistan, from 2013-2014.

Earlier this year, he was named 2018 CLAS District 2 Assistant Principal of the Year.

Matthew Parker is standing three inches taller as he recovers from a long-awaited surgery to correct scoliosis. When The Star-News... read more