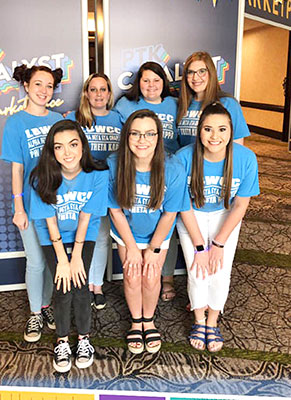 PTK sponsor Heather Owen said she has taken students to the convention every year since she has been the sponsor.

“These students are able to see other students from different backgrounds, traditions and cultures,” Owen said. “I took a group of seven girls from South Alabama who got to experience something that was not in the norm for them.”

Each of the seven students had to be a five-star PTK member in order to go on the trip.

“They had to go through an online professional development plan,” Owen said. “The program helps develop soft skills while gaining skills they need to be successful in college or the workplace. It was a pretty intense program because they had to write essays and spend about four hours doing all of the work.”

The students also had to fundraise for the trip.

“The college paid for the students’ registration fees,” Owen said. “But they had to pay for everything else, so they held a fundraiser to pay for hotels, meals and since we were in Orlando, they raised the funds to go to Disney.”

Lexi Weeks and Kenna Jordan, two LBW freshmen who went on the trip, said that they learned a lot about PTK as a whole. Every student in PTK has to take a class at LBW and do a project for the class. While at the convention, the LBW group decided to go to forums that would help them do well on their projects.

“Through the trip, we had a lot of educational forums,” Jordan said. “Some were in music or speech, but we chose to go to the PTK Honors in Action seminar, so we could get a better understanding of what we had to do for our project.”

Along with educational forums, the students also got to hear speeches from different celebrities such as celebrity chef Jeff Henderson and best selling author Mel Robbins.

“We got to listen to people from the New York Times and people who have written books,” Weeks said. “It was really interesting to be able to hear them speak.”

For Weeks and Jordan, the best part of the trip was being able to mingle with the other 3,500 students attending the convention.

“We got to speak with the different groups all the time and see what their ideas were,” Weeks said. “We are able to take those ideas back to Andalusia and work them in our chapter.”

Jordan said that the forums that were interactive were another highlight of the trip.

“Some of the forums weren’t that fun because we were just sitting there,” Jordan said. “But some of them were very interactive and I think we learned a lot more from the ones that had us doing stuff.”

Another part of the convention was the formal dance.

“When we went to the dance, it was amazing,” Jordan said. “Just to be able to talk with other members who are not even from the same country, it was very eye opening.”