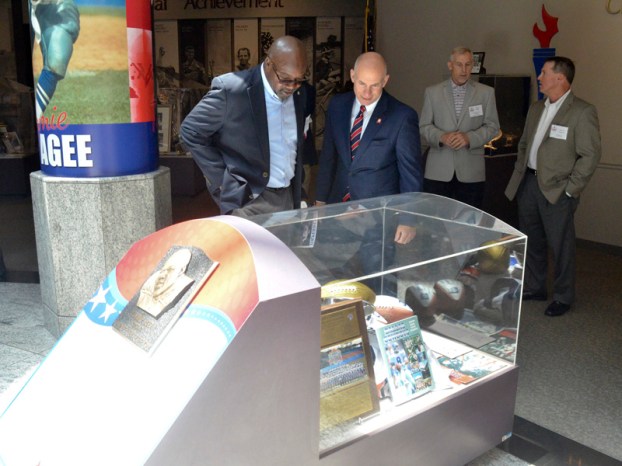 Tommie Agee looks over the memorabilia from his career in his hall of fame case alongside ASHOF executive director Scott Myers. Photo courtesy of The Clanton Advertiser

Agee: Humbled to be inducted

Tommie Agee said he’s humbled by the support family members, former coaches, and new Andalusia friends showed this past weekend when he was inducted in the Alabama Sports Hall of Fame.

Agee, who is the director of leisure services for the City of Andalusia, grew up in Maplesville, and played football like his older brothers. It was there that he caught the eye of Auburn University, where he was a four-year starter at fullback as lead blocker for Bo Jackson. He finished his college career with 356 carries, 1,733 rushing yards, and 13 touchdowns.

A plaque of Tommie Agee will be enshrined at the Alabama Sports Hall of Fame in Birmingham.
Courtesy photo

He was drafted in the fifth round of the 1987 NFL draft by the Seattle Seahawks. He played six seasons in the NFL, which included playing for the Dallas Cowboys during their Super Bowl runs in 1992 and 1993.

“Dallas is where I found my niche,” Agee said. “I fell in love with the plays and the coaches. Jimmy Johnson reminded me so much of Pat Dye in the way that he worked us to death.”

“I never dreamed I’d be included in the Hall of Fame,” Agee said Tuesday. “I was blessed to play at Auburn, in the pros, and to win a Super Bowl ring, but this weekend took the cake.

“I was deeply humbled to be inducted with all of the other athletes,” he said.

His immediate family, including his children and grandchildren, were a part of the ceremony, but many other special family members and friends were, too.

“Coach (Joe) Whitt who recruited me to Auburn was there, and so was our dorm mother,” Agee said. “I had relatives who came from as far away as Florida and Dayton, Ohio. So many people from Andalusia also supported me, from my city co-workers, some members of the city council, and some park board members. It was just great.

“It was definitely a weekend I’ll never forget,” he said.

Travel with a twist: Group trip for grown-ups