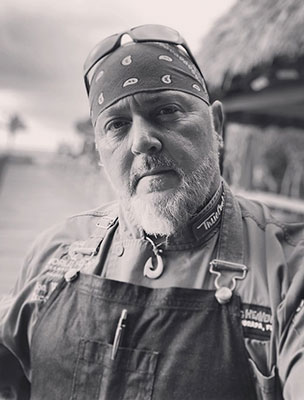 Gibson graduated from Opp High School, but left his hometown to pursue a culinary career.

Gibson, right, and his business partner, Merrill Culverhouse, plan to open a restaurant in Opp this summer.

“I got married and started working at a Pizza Hut,” Gibson said. “My wife was in the military so we traveled around a lot to San Diego, Virginia, Illinois and overseas. I worked with the Department of Defense at that point.”

Six years later, after being overseas, Gibson found his passion for the culinary arts.

“There were a couple of places overseas that I kind of stuck my nose in and worked part time,” Gibson said. “I got to know the people and the cuisine and that is where I really fell in love with it. We moved back to Virginia and I started working at Dirty Dick’s Crabhouse and was the sous-chef there.”

After his divorce, Gibson traveled to California and enrolled in culinary school.

“At that point it was time to decide what I wanted to be when I grew up,” Gibson said. “So I decided to further my culinary career in California and enrolled in Le Cordon Bleu in Pasadena. I graduated with honors and started working at Red White and Blue Wine Bar and Grill, which is kind of where I got my feet wet. After that I started working for a corporation called Rock Bottom Brewery out of Long Beach, and I didn’t really like the corporate stuff, because you’re pretty much handcuffed.”

Gibson was a part of several other ventures in his time before coming back to Opp, including working alongside of Cat Cora and Guy Fieri at the 2006 Wine Festival; working with two-star Michelin Chef Edouard Loubet; making several appearances performing cooking demonstrations at the 2009, 2010, 2011 and 2012 Taste of Newport; KTLA Morning News, and the Orange County Register.

He was  published in Chef Irby’s “The Complete Idiot’s Guide to Cooking Quinoa,” and has had recent appearances on the Food Network series, “Beach Eats U.S.A.” with Curtis Stone, and “Beach Bites” with Katie Lee. Gibson was also awarded 2017 Wild U.S. Shrimp Chef of the Year.

He said that after all of his ventures, he had a life-changing moment that made him reevaluate his life.

“A year ago, I had my chest cracked open and had open heart surgery,” Gibson said. “After that I knew that I wanted have like a life reset and see what I am going to do and what I want to be. So, I moved down to the Florida Keys and worked for Hog Heaven down there.”

While Gibson was in the Keys, Culverhouse managed to bring him back home to Opp.

“Since he was a kid he wanted a restaurant,” Gibson said. “So he and I kind of teamed up and I know that my parents are getting up in age and have always been in and around the Opp area. After talking with him, the mayor and the different people in the Downtown Redevelopment Authority, we want to do this to get Opp back. We are hoping that with this type of restaurant and using me as one of the tools, it will be a sort of catalyst to bring people to Opp.”

Gibson is not trying to cater to just the people of Opp, but instead to the surrounding area as far away as Enterprise.

“When you look at it, Opp is sort of a central hub,” Gibson said. “You’ve got Andalusia, Enterprise, Florala, Laurel Hill and Elba all around Opp. If you look at the population of Opp, yes, it has dwindled since I have lived there, but if you look at the area as a whole, it is pretty big. Of course we aren’t expecting to bring everybody in, but if we can get part of each population, then people will take notice and people will want to invest.”

So far, the Wheelhouse Facebook page has 500 likes and Gibson is hoping to incorporate social media with the restaurant.

“The interest and the feedback that we have gotten so far has been amazing,” Gibson said. “The video from yesterday already has 1,000 views so I am a big advocate for social media because that is the way the world is progressing.”

Gibson said that the style of cooking he plans to bring to the restaurant is coastal cuisine.

“The menu is pretty much done,” Gibson said. “There are still some things that I want to put together, but my style is and what I was labeled as in California was coastal cuisine. That meaning, I deal with things that are coastal like seafood, fresh, organic, sustainability and using under utilized fish.”

Gibson hopes to mix his cultured styled cooking in with the Southern style cooking that Opp knows.

“You will see part of Southern California in there, and part of the Northeast in there,” Gibson said. “But it is going to be Southern based. To kind of give you an idea like working on appetizers, I needed a vegetarian appetizer or vegan appetizer and so I am going to do a black-eyed pea hummus. It’s a little bit something different, but it is still that Southern style. It is cutting edge Southern style food.”

The Wheelhouse Restaurant is not a steakhouse, but will have steaks.

“I don’t want to be pinned down or stuck to one specific food,” Gibson said. “I mean, we will have steaks, but we are going to try and hit every avenue of foods.”

Gibson said that the dining experience of the Wheelhouse will be casual fine dining.

“We want it to be a judgment free zone,” Gibson said. “If you want to take your girlfriend out to dinner wearing a suit and tie and her wearing a nice dress, you can do that, but if you sit next to the mayor and you’re wearing flip flops and a t-shirt, that’s OK too. Everybody is welcome.”

Once the restaurant opens in late July or early fall, Gibson said that there will be 20 to 25 new jobs for Opp and the surrounding areas.

“We are shooting for July or early August,” Gibson said. “It may even be sooner, we are hoping. I’m going to talk to the contractors about this in the next couple of days, but I am hoping to get the kitchen ready first so we can do some catering events and food tastings just to get our food out there.”

The Wheelhouse Restaurant will be located in Opp at 105 East Hart Avenue, across from the Opp City Hall.