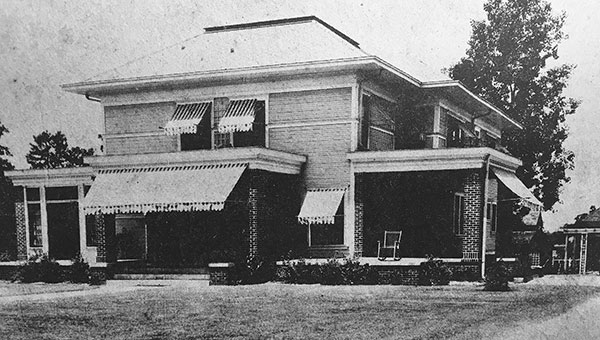 The former home of Ara Snead Henderson, “Aunt Ara” to many, is being renovated by Andrew and Elizabeth (nee Clark) Loflin. It is located on East Three Notch Street and Fourth Avenue. Courtesy Photo

Ever since the restoration work began on the historic home located on East Three Notch Street across from the First Baptist Church, I have been interested in finding out more about the lady who last resided there. I remember knowing of her as “Aunt Ara.”

My neighborhood friend Marge Darling Russell used to talk about going there with our friend Lucy Elaine Prestwood to visit the elderly lady that lived in that house on the corner of Fourth Avenue. They called her “Aunt Ara” so I knew she must be related to the James Prestwood family.

The prominent house had been sitting vacant for some time until a few months ago when a darling couple purchased it and started the restoration process. Many family members of Elizabeth Clark Loflin and her husband, Andrew, have helped in the on-going project. It has been so nice to ride by there at night and see lights on after such a long time of the house being unoccupied. The preservation of a Main Street house is so important. It helps to maintain in part the character of a town. So I started looking into the history of the former occupants. It turned out that the story begins even a little further back.

James Morgan Prestwood, born in 1881 in Andalusia, was the second son and child of James Austin “Uncle Aus” Prestwood and Mary Elizabeth Fletcher. They lived in a home place on East Three Notch, the present site of the Covington County Bank. It was known to be the first house in Andalusia with running water. Morgan attended school in Andalusia and went on to earn his B. A. degree from Howard College in Birmingham and his law degree from the University of Alabama after which time he returned to his hometown to practice law. He was a mayor of Andalusia from 1924 to 1927 and was appointed the first judge of the 22nd Judicial Circuit from 1926 to 1928 by Governor Bibb Graves. Judge Morgan Prestwood died of a heart attack at his home in August 1928.

Elaine Snead was born in 1882 in Dothan, the youngest child of six of Lt. Col. (C.V.A.) John Morgan Snead and Sibyl Anne Kennedy. “Miss Ellie” as she came to be called in later years was reared in a Baptist home. The Sneads moved to Andalusia in 1899 about the time of the railroad extension from Searight to Andalusia with the expectation of commercial growth. The father established a home on the south side of East Three Notch at the corner of Central Street. “Ellie” had attended Dothan High School and then left for college at the Southern Female College in LaGrange, Georgia, a finishing school for young ladies.

Back in Andalusia, she met her future husband, James Morgan Prestwood, and they were married in 1904. They set up housekeeping in a house where the present flea market mall is now located. It was in this home where six children were born – Sibyl Louise, Mary Rosalind, Roger Austin, James Morgan, Jr., Hugh Loring, and Ara Jean.

Wingard penned, “The memory of ‘Miss Ellie’ will ever be linked to music which ran as a golden thread throughout the tapestry of her life.”  She played the piano, taught piano, sang in the First Baptist Church choir, composed music and lyrics, and published piano sheet music. Her song of which this writer found the sheet music at an estate sale, “My Alabama Home,” was written in 1921 and dedicated to her father, a Confederate soldier, who fought with the 57th Alabama Regiment in the “War of the 60s.” It was featured as the theme song in the Annual Ball Program of the Alabama Society in Washington, D. C. Back in that time frame, when the silent movies were popular, “Ellie” was asked by the Z. D. Studstills, managers of the Royal Theatre, to play the background music when the great, silent-film classic, “The Birth of a Nation,” came to town.

In the spring of 1928, according to her son James Morgan Prestwood, Jr., “Ellie” was asked to write some lyrics for the high school alma mater. This was the year of her son Roger’s graduation. It is unclear if the principal or someone in the senior class requested this of her, but she consented to try. She sent the words to several verses written on a piece of white typing paper to the high school office then located in the Church Street School and decided on a tune to put the lyrics to, “Far Above Cayuga’s Waters,” the Cornell University Alma Mater. (This writer often told the students in the AHS Chorus that they should be proud that the tunes to their school alma mater and fight song, “Corn, Corn…” (Notre Dame Victory March) were the tunes to the most popular and beloved high school and college songs in America.)

The AHS Alma Mater was first sung at Senior Class Night on May 25, 1928. Mrs. Prestwood dedicated her “Alma Mater” to the Class of 1928 and its sponsor, Miss Mildred Striplin, an English teacher. The late Mr. Wingard, AHS English teacher of 39 years, wrote, “It is interesting that the high school alma mater was written by one who was not a graduate of the high school!”

Ellie Snead Prestwood’s interests included bringing cultural entertainment to Andalusia and participating in ladies’ civic clubs to better the community. She was a devoted mother and wife. She died at home at the age of 49 of pneumonia and grief in 1932 since she had never fully recovered from the loss of her beloved husband three and a half years earlier. She was laid to rest beside her husband in the Magnolia Cemetery in the shade of a Magnolia tree.

One of “Miss Ellie’s” sisters and her brother-in-law also lived on East Three Notch Street on the corner of Fourth Avenue – Ara Snead Henderson, Mrs. T. E. Henderson. The best way to describe this Southern lady is to read her obituary which was found on microfilm in The Andalusia Star-News by Linda Grimes Harrell, an always willing and helpful genealogist in the Andalusia Public Library.

“A native of Barbour County, Mrs. Henderson was the daughter of Col. John Morgan Snead, an officer in the Confederate Army. She moved with her family to Andalusia when she was a young lady (1899).”

“Mrs. Henderson’s husband, the late Trammell Henderson, was the president of the old First National Bank and a mayor of Andalusia. He was a longtime member of the State Democratic Executive Committee. Mr. Henderson died in 1938.”

“Mrs. Henderson was a charter member of the Civic Improvement Club, a charter member and past president of the Study Club, and active in the First Baptist Church affairs before her health failed.”

“She founded the John Morgan Snead Chapter of the United Daughters of the Confederacy in Andalusia. Also, she was active in garden club work in Andalusia and in the State Federation of Garden Clubs.”

“Always maintaining a keen interest in young people, Mrs. Henderson organized the first chapter of ‘Campfire Girls’ in Andalusia and was a longtime leader in the First Baptist BYPU, now the Training Union.”

“Mrs. Henderson like her sister “Ellie” was a graduate of the Georgia Southern Female College in LaGrange, Georgia.”

“Funeral services will be held from the residence Friday afternoon at 3 o’clock with the Rev. Bob Marsh officiating. Interment will be in Magnolia Cemetery.”

It was a pleasure to correspond with one of Ara’s great nieces. Lucy Elaine Prestwood Schliesser, a school classmate of this writer, has wonderful memories of spending many years there in “Aunt Ahli’s” home. “She was our great aunt, Daddy’s aunt, but we thought of her as our grandmother since our grandmother, Elaine Snead Prestwood, died young. My parents, James and Margaret, lived in the cottage (on Fourth Avenue) behind the big house with a large yard in between. It was there where a lot of Easter egg hunts were staged. There was a large bird bath and wading pool in the yard between our houses.”

“‘Aunt Ahli’ (her Campfire Girls name) and her husband Trammell Henderson had no children of their own, but when her sister Elaine (‘Miss Ellie’) passed away at a young age in 1932, they took to raise all of the brothers and sisters as their own. Ahli’s house had a side sun parlor where she had a bird in a cage. As a child, it was our favorite place to play. Ara was a beautiful and compassionate woman who loved children and flowers. She was creative and gifted in many areas.”

“They owned a cottage in Floridatown where palm trees were brought back from and planted in the yard on the borderline. Before ‘Ellie’ and Morgan, Ara’s sister and husband, died, the musically talented couple would play duets together on their grand piano that was later moved to Ara’s house. In the living room there is where I learned to play the piano. My friends and I would sit on pillows and bump down the stair steps to the landing where Great Grandpa Snead’s portrait hung. Many happy days were spent there.”

To bring this column to a conclusion, this writer decided to visit Magnolia Cemetery off Opp Avenue, the resting places of the Prestwoods, the Hendersons, and the Sneads. It was an attempt to confirm the dates listed above. This Mother’s Day of 2019, it is fitting to Remember When the great mothers recognized here who resided in Andalusia and contributed to the flavor of the town in its early beginnings.

The epitaph on the grave of Lt. Col. John Morgan Snead reads “Out of the shadow of night, The world moves into light, It is day-break everywhere.” And so it was for these two mothers and their loved ones who played important roles in nurturing and rearing their children who also in their generation were great contributors to life in Andalusia as we know it today. Gone but not forgotten!

Sue Bass Wilson, AHS Class of 1965, is a local real estate broker and longtime member of the Covington Historical Society. She can be reached at suebwilson47@gmail.com.

During this Alabama Bicentennial year of 2019, it is a good opportunity to research and understand how the early settlers... read more