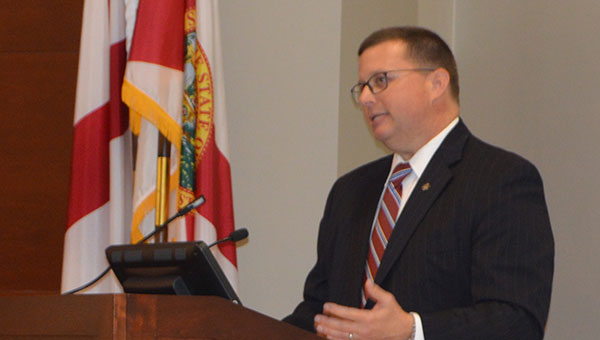 A bill legalizing medical marijuana in Alabama will have a much tougher time in the House of Representatives than it did in the Senate.

Senators approved the bill 17-6 last week, but Rep. Mike Jones told an Andalusia crowd Monday he believes it passed because the sponsor knew how to take advantage of Senate rules.

The Senate’s version would allow doctors to recommend the use of cannabis to treat the symptoms associated with about a dozen conditions listed in the bill, including: autism spectrum disorder; epilepsy; cancer; degenerative or pervasive neurological disorders; glaucoma; HIV/AIDS; multiple sclerosis; muscle disorders, including those associated with muscle spasms; opioid addiction; pain syndromes or pain associated with other medical conditions; and post traumatic stress disorder.

A doctor would have to conduct a physical examination before making the recommendation. The doctor would refer the patient to a second doctor who is a specialist in treating the qualifying condition. Doctors recommending medical cannabis would have to receive 10 hours of continuing education in cannabis treatment annually.

Jones, who chairs the powerful Rules Committee in the House, said, “In the Senate, all it takes is for the senator that is sponsoring it to call it up and if the lieutenant governor allows it to be called up then it is immediately subjected for a vote if nobody objects. The senator that called it up was smart with it and was watching the senators ease off the floor and once the time was right for him, he called it up. It’s an old-school play and frankly, he used it very successfully. Now the bill comes to the House, and it will not have the same path.”

In the House, the bill has been assigned to the Health Committee, which is chaired  by Rep. Paul Lee from Dothan.

The Rules Committee determines which bills reach the House floor for consideration.

Jones said the current legislative session is the craziest he’s seen in nine years in the legislature.

Covington County Commission Chairman Greg White asked a question about a bill would replace the elected State Board of Education with a nine-member commission. The members would serve six-year terms and be appointed by the governor and confirmed by the state senate. Senate President Pro Tem Del Marsh sponsored the bill.

“I think that it is probably a little premature to talk about that bill,” Jones said. “I actually haven’t even read that bill yet and I don’t know if there is a House version that has been dropped yet. When things like that get dropped, especially in the last 30 days of the session, quite frankly they’re being dropped to test to see what the response is and where the opposition is coming from. They may be really trying to push it for this session, but I haven’t been a part of any of those conversations. Often times when you see a big issue bill being dropped late in the session, they are just gaging a response.”

Turning to questions on a proposed state lottery, Jones said his position has not changed.

“I am not a supporter of gambling,” Jones said. “But when it comes to the lottery and the thing that I have said from the beginning is that if there is ever a clean version then I would allow it to go to the people for a vote.

“The version that is moving around now is roughly seven pages long and is actually a clean version, and I do think that it is highly likely that it will get to the House floor for a vote. Does that mean it passes? Not necessarily.”

Jones said that the lottery that would be in the bill would not be a growth fund of any sort.

“We are looking at it generating roughly $167 million per year,” Jones said. “And that is static. You can kind of look at other states to get a feel for how much the lottery is going to bring to the state and because of our population, and with that form of lottery that is what you are looking at. A lot of people say that the lottery can pay for bridges and roads and things like that, well it can’t. The lottery is something that is not going to grow. That growth that used to go along with lotteries is no longer there.”

The bill passed a Senate committee last week, and was briefly debated on the Senate floor Thursday. It is expected to be on the Senate agenda again this week.