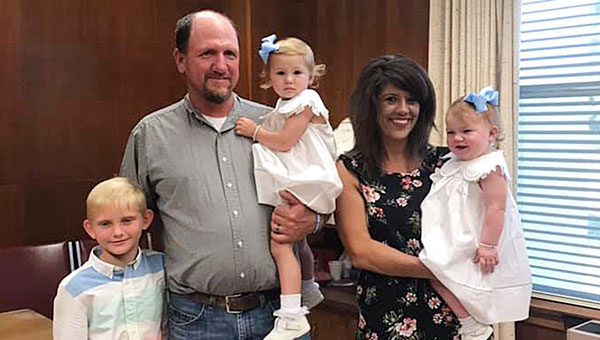 After thinking that they weren’t ready to continue with foster parent classes in 2015, Andalusia locals Tabitha and John Sasser have now fostered five children, and adopted three children in the past year.

“My husband and I contemplated for a while whether we wanted to foster or not,” Sasser said. “We actually started classes back in 2015, then we backed out and decided that we just couldn’t do it. All of a sudden a friend of mine called and told us that she really needed somewhere to place two little girls and if not, then they would have to change schools and move. So, I talked with my husband and we decided to do it.”

Once the couple started fostering, they found out that they loved doing it.

“We really thought about it and we started thinking, whether the girls stayed a week or if they stayed a year, we were giving them an opportunity for them to do something they have never done,” Sasser said. “Like they had never gone hunting before or caught a big fish. Once we got through that, it was like, ‘OK, maybe this is our calling. Maybe this is what the good Lord wants us to do.’ ”

Sasser said that they decided to adopt because her husband had always wanted children.

“My husband doesn’t have any biological children and he has always wanted children,” Sasser said. “Of course, he has always treated my boys like they were his. He has just always had a love for children and wanted them, so when we started this, we thought, ‘OK, what are we going to do if we get a baby?’ He told me that if there were anyway for us to adopt then he would like that. So that was the plan, if one came along then that is what we would do. Our intentions were to adopt one child, not three, but when we got Leland, his dad was really the one that pushed for the adoption.”

Sasser has two biological sons, so she said that rearing two girls has been a challenge.

“It has definitely been overwhelming,” Sasser said. “But it is great I’m not going to lie. I have always wanted a little girl and my boys know that. I mean, I had a niece and I have helped raise several girls, but I have always wanted a girl of my own. So, when we got Emma, she was my baby doll. She was the one that I dressed to the nines and she had all of the pretty bows, jewelry and cute dresses. Compared to having my boys it has been overwhelming, but it is great.”

She said that the biggest challenge of the entire process has been trying to decide what is best for her children.

“Trying to decide what is best for them as far as family goes is the biggest challenge,” Sasser said. “Do you continue to let them have a relationship with their biological family or do you not? What is going to be best for them long term? We actually chose to allow our two girls and Leland to see their biological families. All families have been told that as long as you are not putting them in harms way, then you can see them and visit them. So far that has really worked, but every day I have to think about what is best for them in the long term.”

The best part about the whole process for Sasser is seeing her children grow up and change.

“Just knowing that they are loved,” Sasser said. “It has been fun watching them grow and not having them worry about anything. With Leland, he used to make ‘D’s and ‘F’s in school and now he is on the honor roll at school. He literally has just blossomed, so watching him better himself and really become happier with himself and more confident about the things he has done is a real positive for us.”

For anyone interested in being a foster parent or adopting, Sasser said to think about it very hard.

“It is going to be a challenge,” Sasser said. “But the challenge itself is so rewarding in the end whether you adopt or foster. Like I said before, whether you give that child two weeks or a year, you are giving that child at least one good night’s sleep with no worries. You gave that child one good meal, a set of clothes and one good day that they didn’t have to worry about anything. You have allowed that child to have some type of structure in their life and they will respect you for that.”

The Covington County Sheriff’s Department is partnering with the Town of Sanford to employ a full time patrol deputy in... read more