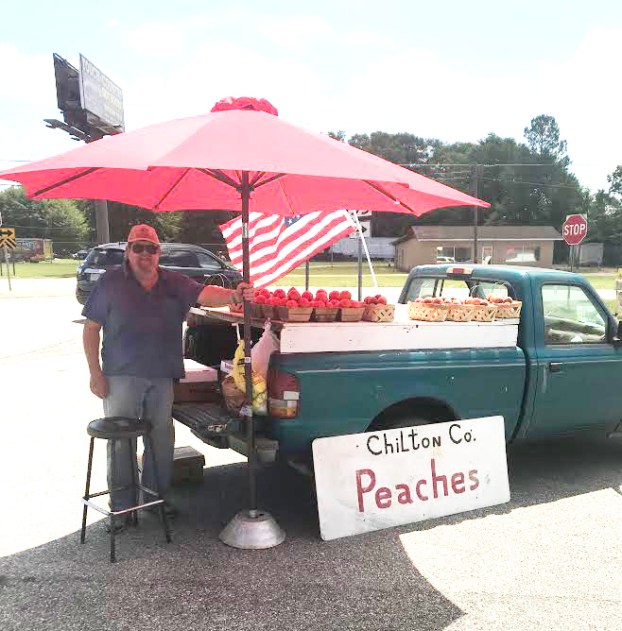 Libertyville local Rondle Brooks is known as the Peach Man

Libertyville local Rondle Brooks has brought his peaches to Andalusia for people to buy for the past 15 years.

Brooks said that he decided to start selling peaches after retiring.

“I was an industrial electrician,” Brooks said. “Now everybody knows me as the Peach Man.”

Although he does not grow his own peaches, Brooks still goes out of his way to bring them to Andalusia.

“I get them from Chilton County,” Brooks said. “Then I just bring them here to sell.”

Brooks said that he chose peaches to sell because everybody likes them.

“I love peaches and I know that everybody else does too,” Brooks said. “Especially in this heat, people love to eat peaches.”

The best part about selling peaches for Brooks is meeting all of the people that he sells to.

“It is all about the people,” Brooks said. “I have them come from all over. Indiana, Illinois, Texas. I just had a couple that has been together for 50 years and they were going on their second honeymoon to the beach. I just love hearing peoples’ stories. I live by myself so getting to talk to people out here is great.”

He said that business is never slow.

“I have people stop all day,” Brooks said. “I make sure to pick up enough peaches to last throughout the day. Sometimes people are looking for me and it is part of their trip to the beach to pick up peaches.”

Brooks also stops every Wednesday and Saturday at the Andalusia Farmers Market to sell his peaches.

“You can only sell peaches for about three months out of the year,” Brooks said. “So I make sure to sell them as much as I can during those months.”

When asked how long he would sell his peaches, Brooks said for as long as he is able.

Make sure to look out for Brooks at the Marathon Gas Station on the way to Florala and at the Andalusia Farmers Market on Wednesdays and Saturdays.

A local Internet service provider announced Thursday that it has successfully expanded broadband to more than 30,000 rural homes and... read more