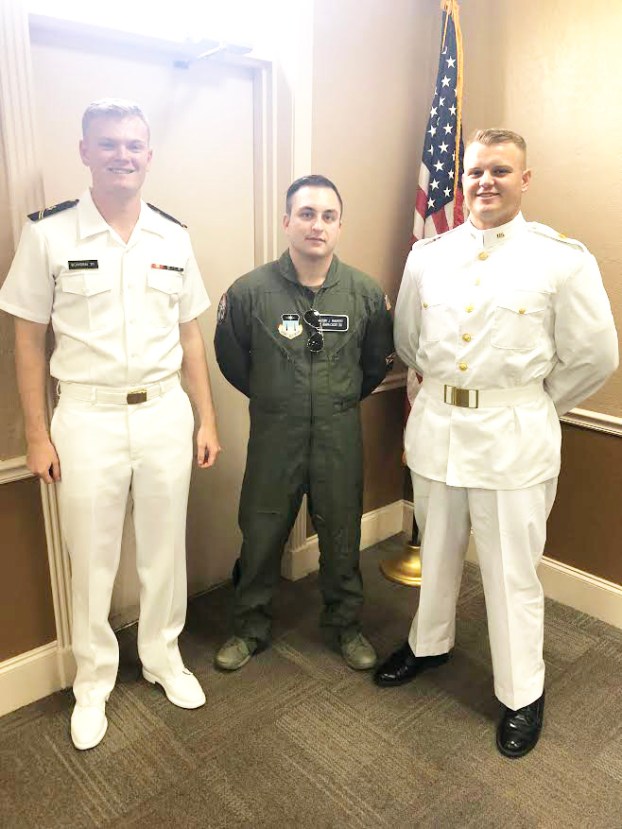 Three different Covington County natives, from three different academies of the military, all shared close to the same experiences while in school.

Philpott, who is an upcoming senior in the U.S. Air Force Academy, said that basic training before the academy was harder than anything he thought it would be.

“The day you get there, all hell breaks loose, so to speak,” Philpott said. “They make you learn real quick that you are not important and that you aren’t worth anything. You are going to do what the Air Force wants you to do. They shake you around for about six or seven weeks before you go into your freshman year.”

His freshman year was harder than expected, as well.

“Getting used to the school and the academic life is a trial all of its own,” Philpott said. “It is rigorous and way harder than I thought anything could be. We had military training on top of that, just learning how to be a member of the greatest Air Force in the world. On top of that, you have physical requirements, as well.”

At the Air Force Academy, Philpott is majoring in political science.

“I chose political science because I thought that it was something I could be successful in,” Philpott said. “As well as something that is pretty applicable to the world today. With the way things are going now, we have enemies all over, and we need to know how to deal with that at a political standpoint. I find it very beneficial to be well versed in how our government works and how our government deals with the threats that they are receiving.

Philpott said that he wanted to fly a plane his entire life, and the reality of actually flying a plane solo a month ago lived up to the expectations.

“As part of a program at the academy, they give you 10 flights overall, nine of which are with an instructor,” Philpott said. “Last month, I was able to fly solo in a single-engine plane. That was probably one of the coolest things I have ever done. It really just reaffirmed my desire to fly.”

Sim Bowden, an upcoming junior at the U.S. Naval Academy, agreed that the beginning was one of the hardest things he has had to endure.

“When I showed up to the academy, the summer before my freshman year, I had to go through a 50-day military indoctrination program called Plebe Summer,” Bowden said. “In the bits of time between the running, yelling and pushups, one of the things we had to do was memorize important things related to the Navy.”

Bowden said that one specific statement within the mission statement of the Naval Academy is in every aspect of his life at the academy.

“The mission of the Naval Academy is to development midshipmen morally, mentally and physically,” Bowden said. “Everything we do is geared towards those three mission areas.”

Morally, Bowden said that he has been shaped by listening to several American heroes speak.

“For one example, I was able to listen to the late Sen. John McCain give his last public address before he passed away,” Bowden said. “Everybody in the Naval Academy loves Sen. McCain and if you ask any midshipmen what their favorite speech is that they have ever heard it would be this speech. He talked about the lessons that he learned at the academy, like what it means to be a hard worker and what it takes to loyal to your shipmates. He talked about how all of these lessons prepared him for the toughest time in his life when he had to resist his North Vietnamese captors during the Vietnamese war.”

Mentally, Bowden said that his development has come from a very rigorous course load.

“I have taken courses like Calculus I, II and III and basic navigation,” Bowden said. “On top of that, I am a cyber operations major, where I’m taking classes that teach me how to plan, write and execute programs in the cyber domain. The heavy course load is mandated by Congress, like all service academies. So, I am sure my fellow cadets feel my pain. I have averaged 18 credit hours per semester since I have gotten to the Naval Academy. It has been tough, but I enjoy school.”

Looking forward, Bowden said that he is planning on becoming a cryptologic warship officer.

“That is a fancy way of saying, an officer who deals with cyber warfare,” Bowden said. “There are a lot of things that I could say about it, but it gets pretty boring. Basically, cyber warfare is the new thing and I’m a cyber operation major. So, I’m hoping to commission into that community. Since middle school, this has always been something that has been pretty neat to me.”

Jones had a little different start from the two previous students because he participated in a prep school before he enrolled at West Point.

“When I had showed up on that first day, I had already did two years of prep school,” Jones said. “So, I knew what to expect going in and was ready for it, but it was a lot more difficult than what I thought it was going to be. Those six weeks were pretty grueling emotionally, physically and mentally. Especially emotionally draining, because you don’t get any contact outside except for letters that you receive. As far as physically demanding, I lost 25 pounds during those six weeks.”

Jones said that he had to make sure to measure out his time during his first year at the academy.

“It is fairly mentally demanding as well as academically demanding,” Jones said. “Because it is a lot of credit hours. It is also very time-consuming because you are constantly busy and constantly doing things. You really have to be able to measure out your time just to be successful in your academics.”

He is studying defense strategic studies major with a concentration in counter-terrorism.

“I am studying that for what will hopefully be a career in the Army,” Jones said. “I do plan on staying in the Army for the rest of my life. As I progress through the academy, I will be given higher and higher roles to prepare me to actually lead soldiers once I get out into the Army. After I graduate, I’ll be given a platoon that could consist of about 35 to 40 soldiers. Those will be the people I lead for about two or three years while on deployment. West Point is doing a pretty good job of getting me prepared for that.”

Looking ahead, Jones said that he will either commission to the armory or the infantry.

“I am required to spend five years in the military as active duty and three years reserves after I graduate,” Jones said. “But my plan is to continue on with the Army past that.”

A Kinston man was bitten on his knee by a venomous copperhead Monday. Kenny Weeks was bitten around 9:30 a.m.... read more