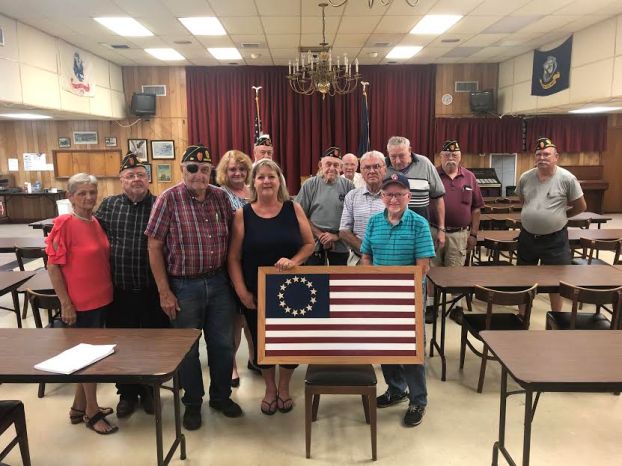 The Daughters of the American Revolution had a special flag lead their Annual Fourth of July Parade that they donated to the Andalusia American Legion.

Andalusia local Brenda Gouge said that she made contact with an artist who makes wooden American flags as a hobby.

“I was in Atlanta a few weeks ago and my daughter, who lives in Seattle, texted me with a question,” Gouge said. “She has a friend in Seattle whose parents live just south of Atlanta in a small town.”

Gouge’s daughter began to tell her mother a story about a specific flag that her friend’s father, Ray McAdoo, had made.

“Her friend’s father is a veteran of the Vietnam war,” Gouge said. “He receives his medical care at the Newnan, Ga., Veteran’s Clinic. As a hobby, he makes gorgeous wooden American flags. He never ever sells them. He always gives them away to veterans, families of veterans or VA facilities or American Legions. He has made between 400 to 500 flags in the last several years. So far, his flags are on display in 21 states and his goal is to have one in every state.”

McAdoo attempted to donate one of his wooden flags to the VA where he receives medical care, but his donation was declined.

“He had asked the Newnan, Ga., Veteran’s Clinic if they would like to have one of his flags and they said, ‘yes,’” Gouge said. “He took them one and then he received a call a week or so later, telling him he would need to come pick it up. They told him that the ‘higher ups’ at the clinic had decided it might be ‘offensive to some. They never explained beyond that.”

After the rejection, Gouge’s daughter asked her if there was something she could do to help.

“This is where my daughter comes in,” Gouge said. “His daughter put it out on Facebook that this had happened to her dad and they were all so upset about it. Lesan, my daughter, said, ‘Mom, is there something you can do to help?’ I was flattered that she thought I could do anything about this travesty, and I told her that the only thing that I could think of was getting the flag from him and it could lead our Fourth of July parade. That would give it a place of honor in the next week and maybe take the sting out of the rejection a little bit.”

The daughters got Gouge in contact with McAdoo and picked up the wooden flag for the parade.

“We stopped in Newnan on the way home from Atlanta,” Gouge said. “We met them in a Wal-Mart parking lot and picked up the gorgeous flag. I assured him it will lead our parade and then he asked me when we were finished with the parade if we could gift it to the American Legion in Andalusia. So, that is where it will hang.”

McAdoo, the veteran flag maker, was a flight engineer on a CH054A Skycrane helicopter. He was discharged from service, July 3, 1969, and returned home on the Fourth of July 4, 1969, exactly fifty years ago.

The Yachtfather, the opening band for the 2019 July Jamz Summer Concert Series, has performed several times in Andalusia, but... read more