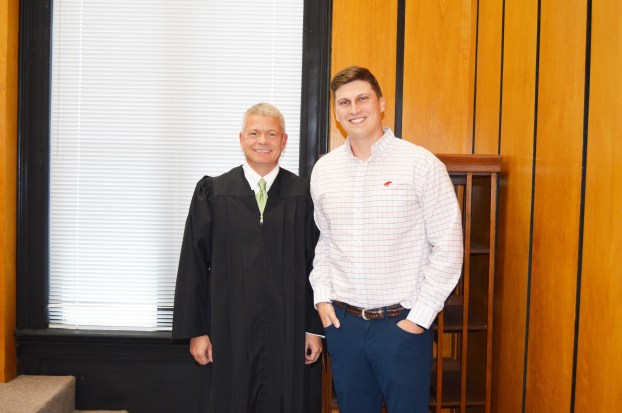 For the third year in a row, the University of Alabama’s School of Law’s Finch Initiative has brought a law student to Covington County to give an insight into rural law.

“In 1997, I left active duty with the United States Air Force,” Bowden said. “I was fortunate to be offered a position with the Albritton firm in Andalusia, which I gladly accepted. I had no idea at the time what a blessing it would be. A few years later, when the newness had worn off and making a living practicing law was more of a job that an adventure, I came across an article lauding the virtues of the ‘county seat’ law practice. The article was very inspiring and lifted my morale such that I still recall the pride I felt in being one of the lawyers it was describing.”

Bowden hopes that the Finch Initiative, named after the fictional character Atticus Finch from the Pulitzer prize-winning novel, To Kill a Mockingbird, will acquaint young lawyers with the notion that the practice of law in towns like Andalusia is both noble and rewarding.

“The contributions such a lawyer makes to his community are up close and personal, as the clients, opposing counsel, jurors and judiciary will be encountered nearly every day in some ordinary walk of life,” Bowden said. “As Justice Robert H. Jackson stated, the county seat lawyer ‘was not popular in [the] community, but was respected. Unpopular minorities and individuals often found in him their only mediator and advocate… He lived well, worked hard and died poor.’”

Chism said he wanted to go into law because of an experience he had at Boys State.

At Boys State, student delegates will find the opportunity to build new friendships, participate in a mock government, and hear from and meet a diverse array of Alabama leaders such as Congressmen, state elected officials, business leaders, civic leaders, and others. Delegates will have the opportunity to join interest groups that focus on their individual areas of interest such as law school, fire college, law enforcement academy, aerospace academy, lobbyists, city government, county government, constitutional convention, engineer/computer academy, and environmental interest group.

“During my junior and senior year of high school I participated in Boys State in Tuscaloosa,” Chism said. “It was my first real interaction with government. While I was there, I was actually senator of our mock government and it just made me want to do politics in the long term. Logically, the best way to get into politics is to study the law.”

Chism said there is a bad reputation that comes along with small-town law, but once he spent a summer shadowing Bowden, he noticed how wrong that is.

“A lot of small town practices kind of get a bad reputation for not being as good as a big town firm,” Chism said. “But everyone I have talked to here has been extremely intelligent. I mean, I got to spend a day with Mark Christensen and he radiates intelligence. I also got to spend time with Rep. Mike Jones and he is the same way. I just think it is not recognized enough.”

While he has been shadowing Bowden, Chism has researched several cases, sat in court observing and even traveled to Montgomery with Rep. Mike Jones.

“I actually got to go with Mike to Montgomery one day,” Chism said. “And it was on the day that John Merrill announced that he was going to run for Senate. I was actually on the ground floor of that and got to meet him, which was really cool because I have never been that close to a political campaign.”

Looking forward, Chism believes that the Finch Initiative will definitely prepare him for his classwork in law school.

“I have had other internships, but there were too many interns in the same place,” Chism said. “With this program, I was able to be one-on-one with Judge Bowden and he always made sure that I was brought in on everything. He would always ask me what I thought about cases and would tell me what he was thinking. I hope more than anything that this has taught me more how to look at a case. I think any time that you can learn from a judge who is deciding legal cases, it is going to help with your legal practice.”

Chism’s time in Andalusia was spent mostly in the courthouse, but when he wasn’t working, he spent his time at the gym.

“The days are actually pretty long,” Chism said. “So, I joined the USA gym here and basically just get off of work, go home and sleep and do it all over again. I did get the opportunity to spend time with several local lawyers and everyone was so nice. They all tried to give me as much wisdom as possible.”

Chism is going into his second year of law school at the University of Alabama. He earned his bachelor’s degree in history and psychology with a minor in political science at UA. His dream is to practice sports law.

New Florala High School band director Brittany Vanwinkle is excited to ramp up the program this year. “When I was... read more