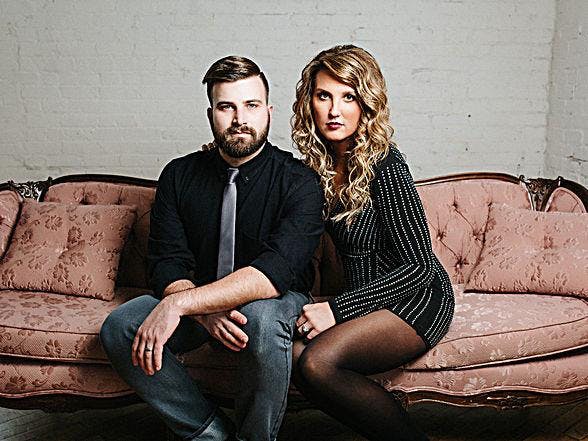 Enterprise native Mr. Halcomb moved to Nashville with a group of guys after studying two years of pre-medication in college.

“The Springs has always been my band,” Mr. Halcomb said. “We moved collectively to Nashville and tried to pursue music. My parents told me if we could get a gig there then we could move there. So, I called Tootsies and got us a gig there and we moved up there.”

New Market native, Mrs. Halcomb had all intentions of moving to Nashville when she was a little girl.

In 2007, Mr. Halcomb experienced something that would change his life forever. He survived the tornado that hit Enterprise High School.

“I actually wrote my first song after that happened,” Mr. Halcomb said. “I was on the second hall of what is Enterprise’s four halls and the third one was the one that was actually hit by the tornado. I was pretty close to it. Thankfully right before the tornado actually hit the high school, I was in the science wing, which is an all-glass section of the building. Thankfully our teachers moved us right before the tornado was about to hit. The roof was off of the building and I remember looking up and just seeing the sky. I stayed after and helped paramedics pull students from the rubble. I am a nerd. So, I actually went back to my locker and didn’t know if we were going to have a test or not.”

Mrs. Halcomb is no stranger to tragedy either. She lost her grandmother and cousin in drunk driving accidents.

“She was a huge fan of mine and had always pushed me to move to Nashville,” Mrs. Halcomb said. “There are definitely times where we will get with cowriters and decide if we are going to do a sad song and we will reflect back on those times. These are terrible things that have happened, but you can always kind of take those tragedies and turn it into something good to be positive with people.”

Through the tough situations, the Halcombs still pursue one goal. Honoring their families and friends.

“In music, I’m not only trying to honor my parents, but I’m trying to honor the friends that I lost that day,” Mr. Halcomb said. “If you listen to Holly and I’s music, we are trying to honor our family and friends, hence why you will never hear us curse or talk about drinking and partying. We just don’t want to write anything that you would be embarrassed to listen to with your grandmother. Another thing that I think about is that we write a lot of stuff that is relatable. Most people have gone through something tough, and if they haven’t then they haven’t lived long enough. If you read the biographies of almost any musician that you can think of, they all have gone through something tragic, which is why we turn to music.”

Mrs. Halcomb made it to the third round of preliminaries of NBC’s “The Voice.”

“Being on ‘The Voice’ was actually pretty cool,” Mrs. Halcomb said. “It is definitely one of those things that has its challenging moments. We have a lot of friends that have kind of done the same thing. You learn a lot as far as patients and that there are millions of other people out there that are talented and a lot of them are better than you are. It was a great experience though. I highly recommend doing something like that if you are looking to pursue music.”

Even though they travel all over the nation, the couple is excited to come to small-town Andalusia for several reasons.

“For us, it’s a combination of seeing family and coming to a place that has supported us before,” Mr. Halcomb said. “The radio stations there are some of the first radio stations that ever took a chance of playing my music. Everybody from Andalusia has just been so kind to us; Chrissie and everybody that we have talked to at the chamber have been incredibly sweet. For me, any place that is willing to have us, we are going to play.”

The couple wants people to walk away from their performance with not only a feeling of excitement but hopefully with the music that they listened to.

“We really just want people to enjoy themselves,” Mrs. Halcomb said. “They come out and spend money and spend their one free night. So, we want them to have the best experience possible. We would also love for them to walk away with some of our music as well. Whether that be in hand, in their phones or in their heads. We would just love for them to enjoy the show so much that they become fans and want to see us again.”

The Springs have shared the stage with some of country music’s top recording acts including Florida Georgia Line, Thompson Square, Jake Owen, Josh Turner, Gary Allan, Hunter Hayes, Love and Theft, Mark Wills, Little Big Town, Eric Church, Alan Jackson, Toby Keith, Charlie Daniels and Easton Corbin. As down to Earth as they are talented, The Springs enjoy interacting with their fans of all ages. Their fans have taken on the name “Springsters,” and have truly become more than just “fans” to The Springs. Stewart and Holly actually call their fans, “frans” (friends + fans = frans) because they truly feel a personal friendship between each fan. After each show, they stay to make sure they sign autographs and take pictures with everyone that comes (many times 4-6 hours) to let each “fran” know how much they mean to them.

After 32 years, Steve Dyess is stepping down

Andalusia native Steve Dyess has been seen cutting the grass around the schools, wax floors or driving the school buses... read more