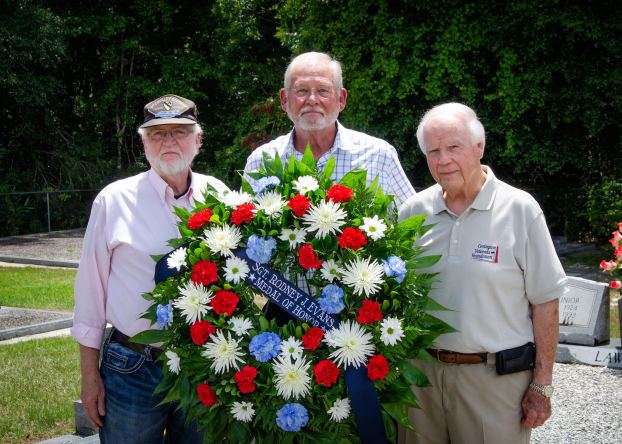 The Covington Veterans Foundation placed a wreath at the gravesite of Sgt. Rodney J Evans on Thursday, July 18, to honor his sacrifice 50 years ago that day. The arrangement was a gracious donation by Alan Cotton Florist [ribbon embroidery by Andalusia Sewing Center]. Present at the Liberty Hill Cemetery were platoon mates Basil B Clark and Gary DeRigne who were with or near Evans during the actions that led to Evans' receiving the Congressional Medal of Honor. CVF Chairman, John Vick, is pictured with them.

Several members of the Covington Veterans Foundation board were able to attend the Remembering Rodney event held on July 18 in Florala. The program honored Sgt. Rodney J Evans, who was killed in combat in Vietnam 50 years ago on July 18, 1969,  while serving with Delta Company, 1st Battalion, 12th Cavalry Regiment, 1st Cavalry Division [Airmobile].

The highlight of the program was the recollections of two of Evans’ Platoon mates who were with or near him when he died. Sgt. Basil B Clark and Sgt. Gary DeRigne gave their first-hand accounts of the battle in which Sgt. Evans died. Clark drove in from Chattanooga, TN. and DeRigne flew in from Overland Park, KS. Both men were very emotional as they recalled their friend and the time they spent together in Vietnam. They also played a recording made in April 1971, when Pres. Nixon awarded the Congressional Medal of Honor, posthumously, to Sgt. Evans. The citation reads:

For conspicuous gallantry and intrepidity in action at the risk of his life above and beyond the call of duty. SGT Evans distinguished himself by extraordinary heroism while serving as a squad leader in a reconnaissance sweep through heavy vegetation to reconnoiter a strong enemy position. As the force approached a well-defined trail, the platoon scout warned that the trail was booby-trapped. SGT Evans led his squad on a route parallel to the trail. The force had started to move forward when a nearby squad was hit by the blast of a concealed mine. Looking to his right SGT Evans saw a second enemy device. With complete disregard for his safety, he shouted a warning to his men, dived to the ground and crawled toward the mine. Just as he reached it an enemy Soldier detonated the explosive and SGT Evans absorbed the full impact with his body. His gallant and selfless action saved his comrades from probable death or injury and served as an inspiration to his entire unit. SGT Evans’ gallantry in action at the cost of his life were in keeping with the highest traditions of the military service and reflect great credit upon himself, his unit, and the U.S. Army.

The Covington Veterans Foundation would like to commend the Remembering Rodney organizing committee chaired by Kim Williamson of Florala. The event was held in the Rodney J Evans Memorial Civic Center located on the shores of Lake Jackson.

This column was written by John Vick for the Covington Veterans Foundation. The Foundation writes a weekly column in the Star-News to promote local veterans.