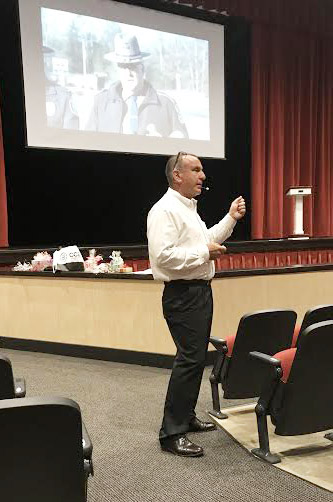 Andalusia City School’s staff, board members and Andalusia city officials had the opportunity to hear, first-hand, the harrowing stories of the Sandy Hook Elementary School shooting by Dr. Joseph Erardi.

Erardi was the superintendent of schools for Newtown, Conn., from 2014 to 2017, right after the tragedy at Sandy Hook Elementary.

In his presentation, Erardi discussed the best proactive practices, the importance of high-level partnerships pertaining to safety and the critical need to have safety information updated and understood by all within the district, as well as a timeline of exactly what happened 11 minutes into the tragedy and a background on the shooter, Adam Lanza.

Erardi said the area in which he was superintendent reminded him of Andalusia.

“You get to a point in your life where you are looking for one last best challenge,” Erardi said. “Southington was right in the heart of central Connecticut. It was 20 minutes from Newtown, Conn. I thought of going to do some things in Washington, D.C., because I am deeply invested in the National Association of Superintendents, but I raised my hand to transfer to Newtown.”

His entry into Newtown was to rebuild from the tragedy the school system had just faced.

“I came in approximately nine months after 26 lives, plus two, Adam Lanza the shooter and his mother, were lost,” Erardi said. “Dec. 12, 2014. What I want to do is take you through it.”

With staff members and law enforcement officers intently listening, Erardi challenged them to put a lens or hat of the position that the staff would have had in the situation.

“Everything is important,” Erardi said. “Everyone matters. You’ll see from the Newtown story that it doesn’t make a difference if you’re the superintendent, principal, the teacher, the paraeducator, the custodian, everybody is all in.”

The first thing Erardi wanted the audience to think about is what they would have done if they were put in the same situation.

“The first thing I want you to think about is a horrific thing to think about, but you need to be able to think through it,” Erardi said. “What would happen if in your middle school, high school or elementary school; what would you do if there was a weapon in your building for all of the wrong reasons? I asked that question to the leadership classes that I teach, and every aspiring administrator said the same thing, ‘I’m going to go to the perpetrator and I’m going to make sure that I keep my students safe.’ If you think through that that is what your first visceral reaction is. That is what your gut is telling you to do. However, if the competition is an assault rifle versus a cell phone or a walkie-talkie, that is not the best decision to make. You have to think about how quickly you can connect with somebody. How quickly can you network, who would you talk to, to get the information in the right hands?”

Background on Adam Lanza, the shooter

“For mental providers in the audience, I think you know better than I do, that if school doesn’t work for a child, hopefully home will work, or coach will work, or religious leader will work, and if home doesn’t work, maybe school will work,” Erardi said. “There has to be something that a student can depend on. Adam Lanza, had nobody but his mother.”

Lanza had no friends, a social isolate and lived in his basement, Erardi said.

“He lived in his basement,” Erardi said. “Shame on you, Newtown Public School; shame on the town of Newtown. They allowed that to happen. Shame on his mother. If she was here today, she should be incarcerated for the rest of her life. Adam Lanza took black garbage bags to cover the windows in the basement. He lived in complete darkness 24 hours a day. His only contact was his mother, who would send meals down there for him. The only further contact he had with his mother was for her to get weapons and ammunition. The two assault rifles and the pistol he brought into Sandy Hook were purchased by his mother. The rounds of ammunition were purchased by mom.”

According to Erardi, Lanza planned the shooting for two to three years before it actually happened.

“He had charts of every mass murder across the country and he had plans,” Erardi said. “This is what happened. Lanza wakes and starts his Friday morning, after announcing on social media exactly what he is going to do. He starts his Friday morning by taking his mother’s life as she slept in her bed. He gets into his car, dressed in all black. He is 21 years old, 105 pounds and 6 feet tall. He is anorexic. He has earplugs because he is sensitive to sound. He has extraordinary obsessive-compulsive disorder. If he were to sit in a chair, he couldn’t sit in it because somebody had sat in it before him. He would obsessively wipe his hands for hours and hours every day. Most people believe that he drove to the high school first, because he had a terrible experience there. Most of the problems were due to his mom and the lack of cooperation with the public schools. He drives to Newtown High School, sees the security resource officer’s car and drives away to Sandy Hook Elementary School.”

What happened in 11 minutes at Sandy Hook Elementary

Erardi went on to explain step by step what happened as soon as 911 was called.

“What we all know, is that time is treasure,” Erardi said. “The safety officials in this room should be nodding their heads in this room right now, because every second matters in a tragedy. The country has learned from the Columbine tragedy that you could have the most sophisticated SWAT team, trained and developed, but by the time the SWAT team assembled in Columbine, the tragedy was over.”

When Lanza pulled up to the front of Sandy Hook Elementary School, he had enough ammunition to take out everyone in the school.

“He blows through the front door,” Erardi said. “Concurrently, the building principal Dawn Hochsprung, the school psychologist Mary Sherlach and the lead teacher are in a meeting one door down from the main office. The principal leaves the meeting thinking that the noise outside is from the heater turning on. She goes out the door first, and is slaughtered. She is shot 11 times. Mary Sherlach follows her, still unbeknownst to what is going on, and then she is slaughtered. The lead teacher, Natalie Hammond, which if you wanted to find courageous in the dictionary her name would be beside it, she goes out into the hall and is shot seven times. She plays possum, drags herself into the room and holds the door closed from the inside with her feet, trying to keep everyone in the room, who are panicking, safe.”

Lanza then makes his way to the main office.

“The secretary in the elementary school office is seeing and hearing what she can’t believe and smelling what is going on right in front of her, ” Erardi said. “She goes to grab the phone, which was used as an intercom to talk to the entire school, but there is not enough time for her to share a message. Now what you have in the school, is the phone off the hook, any sound being magnified across the building, the secretary under the desk and the school nurse behind the office, both safe.”

The next lesson that Erardi said is important for the school to have is that their safety plan is never complete.

“In that plan, there needs to be ‘in-the-moment instructions,’” Erardi said. “Lanza’s next stop is in the kindergarten-first grade hallway. It is taught by a teacher named Kaitlin Roig. Kaitlin is a fourth year teacher and is really smart. She knows that she cannot go into the hallway because if she is in the hallway, then she is dead. She knows her door is unlocked. She takes the 11 students that were present with her, brings them into the bathroom, scaffolds the 11 children, gets herself inside the door and presses her feet on the door so no one can enter. She saves the lives of every single child. She would not leave the position she was in until law enforcement officers slid I.D.’s under the door. Lanza sees no one in that classroom. So, he goes to the next classroom.”

The fourth lesson that Erardi taught was who knows the safety plan.

“Make sure that every single part of your staff are in safety meetings,” Erardi said. “Secretaries, lunch room workers, teachers, administrators and custodians. The day custodian on that day of tragedy was off for that day and the night custodian was filling in. His name was Rick Thorne. He knew that he had the master key. He ran in front of gunfire and locked into safety 13 classrooms. What he remembers next and last, from the tragedy, is that he was bellied to the ground by law enforcement officers with multiple weapons pointed at his head. First responders thought that he was the perpetrator.”

Lanza ended the 11 minutes by ending his own life.

Learning from the past

Erardi shared things that the survivors from the tragedy wanted to be shared.

“I met with the survivors in the summer – post tragedy,” Erardi said. “It was a meeting that was involuntary, without the press and it was emotional. I really hope that what I share, every person in this room takes something from it.”

The first thing shared from Erardi was the district should have a safety team and plan set in place.

“You all have to have a multidisciplinary team and safety plan with all of the government agencies, school personnel and community members,” Erardi said. “This is where all of the work should be getting done. If you don’t have that in place, then talk about. Talk about it and see if it can be in place. What you need is what you need. As a leader, as a teacher, as an administrator, you should never ever, ever, ever, ever, stand in front of a national audience and say, ‘Wish I had, wish I could have, wish I shouldn’t and I didn’t know.’ From a school board perspective, if a superintendent and a member of the safety team says, ‘This is what we need,’ then it should be an untouchable thing in that budget that focus needs to go on.”

What Erardi thinks of Andalusia

“You didn’t do what was easy,” Erardi said. “You did what was right. This is a district that has an awful lot to be proud of. There are a lot of pieces that are in place and to have me speak on a day of celebration is courageous on their part. I am pleased to be here.”

Adopt-A-Grade has raised more than $20,000 for teachers

Over the past four years, Christopher and Donna Lawrence have raised more than $20,000 with their Adopt-A-Grade program. “Every year... read more