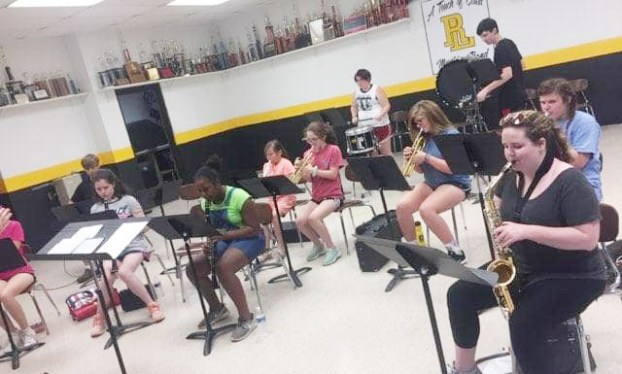 The Touch of Class had its band camp last week and Bell said students were excited to be there.

This year, the band will take the audience back to the 1980s with their show by playing selections such as “Jump,” “Open Arms” and “Power of Love.”

“I chose this type of show because I graduated high school in the 80s,” Bell said. “I have always been familiar with these types of songs and I have always wanted to do an 80s show. It has definitely taken me back to high school. The students have said they like the style, which I find interesting because I didn’t think any of the students would know the music. The last day of band camp, all the students dressed up like they were in the 80s. They were really making the most of it.”

As far as the size of the band, Bell said they have increased in size since last year.

“I think the biggest contributor to that has been we have more color guard,” Bell said. “We are a young band, but we are looking for great things, and they were really excited last week. So, I think it is going to be a really good experience.”

Bell is no stranger to Covington County. He transferred from Florala High School to take over the Touch of Class.

“I think the biggest change has been the drive,” Bell said. “I am a lot closer to Red Level. So, I think the drive was one of the main reasons I took the job. Also, I am the pastor at Fairmount Baptist Church, which is right across from Red Level High School. When I was at Florala, I would have to drive about 20 minutes. Now, I don’t have to do that anymore.”

Bell said he is looking forward to the Friday night lights the most.