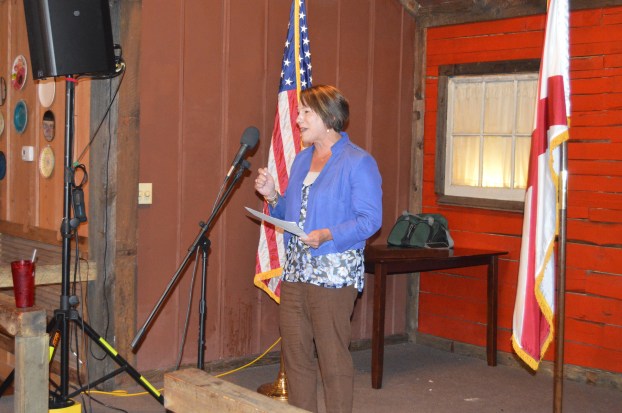 Rep. Roby plans to fight until the finish

Now that Rep. Martha Roby has announced she is not seeking another term for office, she still said there is a lot of work left to do before her term is over.

“Sixteen years ago, my husband and I very prayerfully decided that I was going to put my name on the ballot for the very first time to run for Montgomery City Council,” Roby said. “Never, never could we have imagined that that decision would lead to serving five terms in the U.S. House of Representatives. Riley, Margaret, George, our children, and I, will forever be grateful for the privilege of having served our country in Congress and to serve you, the people of Alabama 2nd Congressional District. I will never be able to adequately express to you how deeply grateful I am that you have given us the confidence to serve you and be your conscious in Washington since Jan. 5, 2011.”

Roby addressed several citizens of Andalusia at a fish fry at the Buckboard Restaurant hosted by PowerSouth and the Andalusia Area Chamber of Commerce.

She addressed several topics that were accomplished throughout her time in Congress, and also talked about the issues that she is focusing on during her remaining time in office.

“We still have some very important work ahead,” Roby said. “My priorities will remain the same. Of course, our military, making sure that we get funding on time so that we have that certainty and continued support. We still have a lot of work to do here at the VA in Alabama. We’ve made some improvements, but we still have a lot of work to do. Quite frankly, this is a fight that will go on until the very end for me. It is so important that I leave this VA better off than how I found it. Agriculture is the largest employer in the state of Alabama. So, I will continue to make sure that we are doing all that we can to support agriculture and all of the industries surrounding that. Last, any opportunity to speak up for the unborn, I will always take that opportunity.”

Over the last nine years, Roby said she has always tried to do the right thing.

“You know, I try to wake up every day and do the right thing,” Roby said. “I try hard to fight for the people that sent me to D.C., to fight on their behalf. I will tell you, I am extremely proud of the work we have done on behalf of the 2nd District. Certainly, I didn’t always get it right, and I don’t know if I can point to one specific thing that I wish I could do better, but looking back over these nine years, I can honestly say that I put my heart and soul into this job and did everything I could for this district, this state and this country.”

With several heat advisories that have happened over the week, locals may need to check on their livestock. Covington County... read more