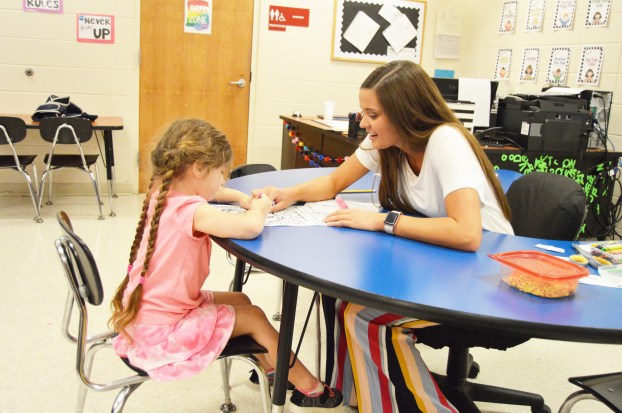 Wilson was bound to become a teacher

“I have always wanted to be in education because it is in my blood,” Wilson said. “My mom is a teacher, two of my three aunts are teachers and my uncle is a teacher. There really wasn’t much of a choice for what I wanted to be when I grew up.”

Though she has always wanted to be in general education, something changed during her senior year at Opp High School.

“I have always loved kids, so I knew that I wanted to go into elementary education,” Wilson said. “Then, when I got to my senior year of high school, I only needed three classes to graduate and there were seven periods. So, I started talking to the counselor and she told me about a program that they had at the elementary school. I came to the elementary school thinking that I would just be signing paperwork, but there was a student that was coming into kindergarten with autism, and they wanted me to assist her. That is really when I fell in love with special education. It seemed like every one in the room was there for a purpose. I got to see special education in a positive light.”

After graduating from OHS in 2015, Wilson went on to Troy University where she earned her bachelors’ degree in elementary and collaborative K-6 education.

“I decided to go straight collaborative education at Troy when I first started,” Wilson said. “I finished that degree and could have graduated a semester early, but I didn’t really want to do that, because most schools don’t hire teachers in December. Then, my mom suggested that I check the course load to finish another degree in general education. So, I am actually certified to do both.”

Wilson said everything fell in line perfectly for her to work at her alma mater.

“I had always jokingly said that after Amy Jackson left that I would love to take her spot,” Wilson said. “In January, I had a paid internship because they had an overabundance. So, the special education coordinator wrote a grant. Mrs. Jackson then moved to the middle school. So, I had no doubts about where I was supposed to be.”

Since special education is such a broad subject, Wilson said there were some things that college didn’t prepare her for.

“I felt like Troy really prepared me for the parents of special needs children,” Wilson said. “My professor at Troy really knew what was going on because he had a son with special needs. So, he made us think, ‘What if it was our kid?’ With our kindergartners this year, a lot of the parents have been a little nervous. So, I try and call them to reassure them and give them an update because if it were my kid I would want to know how they were doing. I think they prepared me for that, but actually dealing with a kid is a whole different story, because every day is different.”

With this being Wilson’s first week as a certified teacher, she said it has been a little overwhelming, but well.

“All of the teachers here have been so helpful,” Wilson said. “They will see me in the halls and stop me and say, ‘Is everything OK? Do you need anything?’ but so far I have been good.”

Looking forward to the year, Wilson said she is excited to begin teaching life skills to her students.

“I am a big proponent of life skills,” Wilson said. “The kids in my class need that. I am just excited to teach them how to brush their teeth, sweep the floor or take out the trash.”

Wilson is the daughter of Craig and Kelley Wilson.

Rep. Roby plans to fight until the finish

Now that Rep. Martha Roby has announced she is not seeking another term for office, she still said there is... read more