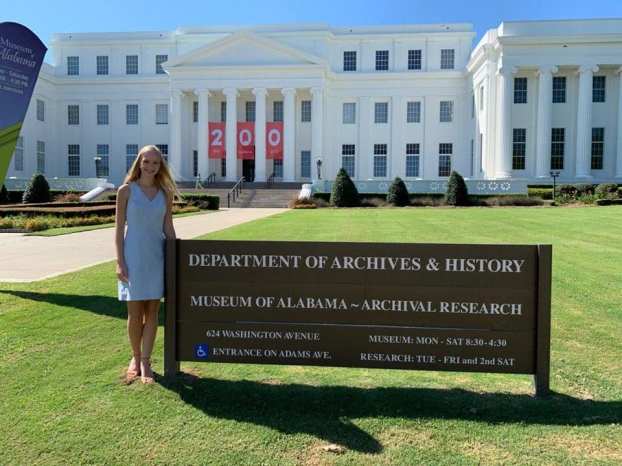 Pugh traveled to Montgomery two weeks ago to start planning for the months leading to the end of the bicentennial.

“The committee is made up of about 30 to 35 students from all around the state,” Pugh said. “Two weeks ago, we met at the Alabama Department of Archives and talked about our plan and what we are going to do until December 14, which is the last day of the bicentennial.”

Part of Pugh’s job is to take over the Alabama Bicentennial’s Twitter page and conduct three video interviews to present on the page.

“Each student will have a week to take over the Alabama Bicentennial’s social media, which is mainly through Twitter,” Pugh said. “On the page, we have to post three interview videos. So, I am going to interview an elected official, a teacher and some different students to show the diversity and how our community supports all aspects and different views. This year’s bicentennial is focused on sharing your story. So, I am trying to get people in the community to share their stories of the community that way I can show it to the kids in the elementary school because it is important for them to remember where they came from. Our school project for the senior class is something along those lines. We want to make a time capsule and bury it. So, we can come back in 20 or 30 years and open it up again.”

Pugh said traveling to Montgomery and collaborating with several different students was different than what she is used to.

“It was different because me and this girl from Clarke County were really the ones from the smallest schools,” Pugh said. “There were kids from like Birmingham, Huntsville and Montgomery. So, they were talking about how their towns were making these huge events for the Alabama Bicentennial and we didn’t really get to talk about that. On the flip side, they were also talking about how they wanted to do events at their school to reach all of the students, but their schools were too big.”

For the next couple of weeks, Pugh will be gathering information and conducting interviews for her Twitter takeover starting at the end of September.

“I have to do my interviews two weeks prior to that week,” Pugh said. “Because they have to approve everything.”

Pugh said she is absolutely grateful to be representing Covington County in this capacity.

“I love to represent Straughn and Covington County,” Pugh said. “I am honestly very grateful for the opportunity and thankful that Mrs. Shiver thought enough of me to choose me.”

After graduation, she plans on attending the University of North Alabama to earn her bachelor’s degree in accounting.

She is the daughter of Shannon and Beverly Pugh.