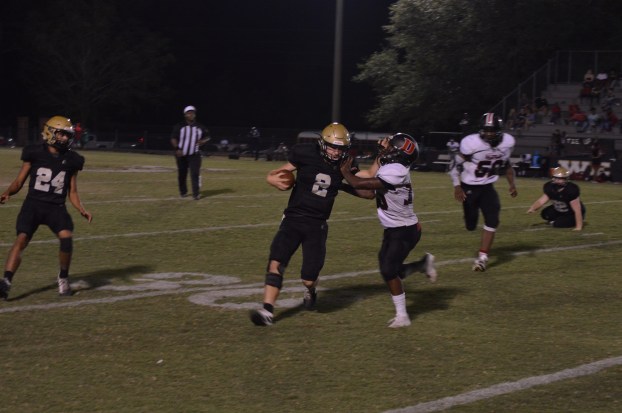 Straughn puts up a good fight, but falls to Daleville

The Straughn High School Tigers put up a strong fight, but ended up falling to the Daleville High School Warhawks, 50-35, last night.

The Tiger opening drive started at their own 28-yard line, but with quarterback Adam Anderson stepping up and converting on fourth down, they managed to get down to the 10-yard line, cutting eight minutes off the clock.

Nicholas Lawson rushed ten yards into the end zone to get the Tigers in the lead early, 7-0.

The Warhawks had a big kickoff return, taking it to the opposing 38-yard line.

With 3:58 left in the first quarter, the Daleville quarterback passed a screen pass to the right, which led to the first Warhawk touchdown.

After an onside kick, the Tigers took over on their own 47-yard line.

With 2:55 left in the first half, the Tigers had a bad option that led to Daleville taking over on the 22-yard line.

The Warhawks increased their lead with a rushing touchdown with 32.7 seconds left in the first quarter. After the two-point conversion, the Warhawks were up 14-7.

Straughn answered back quick when Anderson connected with Demetric Toney for an 87-yard touchdown pass.

At the end of the second quarter, the Warhawks hammered another touchdown and two-point conversion to increase their lead 22-13.

The Tigers hoped to cut the lead when Trey Strickland had a long rush touchdown, but it was called back for holding.

At the beginning of the second half, Daleville struck again with a long rush from their running back to go up 30-13.

The Daleville running back answered again with a 64-yard rushing touchdown and a 25 yard touchdown to increase their lead 42-21.

At the beginning of the fourth quarter, Strickland punched it in the end zone again for the Tigers to cut the Warhawk lead 42-27.

After a fumble from the Warhawks, Straughn capitalized when Jeremiah Adkison ran a reverse for a touchdown. Nicholas Lawson caught a pass in the end zone for the two point conversion.

The Tigers only trailed by one touchdown when the Daleville running back rushed for another touchdown and two point conversion to end the game 50-35.

Williams said the Straughn team he saw tonight is a completely different team than what he saw in the beginning of the season.

“We just keep getting better and better,” Williams said. “The thing is we are trying to build a football program here not just a football team. I am really proud of my guys.”

SHS grads reminded, ‘We are family’

Straughn High School Valedictorian Elizabeth Porter addressed her 81 classmates last night, and said that SHS is not like other... read more