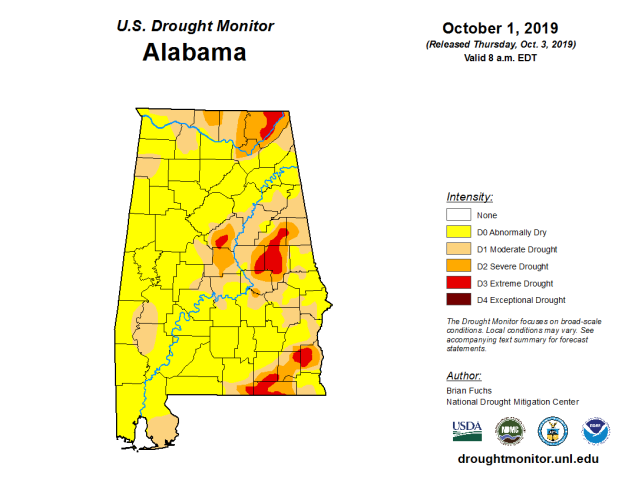 With no rain, portions of Covington County are under an extreme drought.

Every portion of the county is at least considered abnormally dry, with others encompassing the moderate and severe drought categories. A large area of the southeastern Covington, southern Coffee and western Geneva county are included in the extreme drought.

According to drought.gov, 1.7 million Alabamians are in drought conditions and 3 million are in abnormally dry areas.

An extreme drought, which currently includes 3.5 percent of the state of Alabama, means major crop and pasture losses for farmers and could mean widespread water shortages or restrictions.

Severe drought, which includes 8.5 percent of the state, can cause crop and pasture loss, water shortage and more.

Moderate drought, 23.4 percent of state, can cause some damage to crops, pastures; some water shortages develop.

Sixty-four percent of the state is abnormally dry. That can cause short-term dryness slowing planting and growth to crops, some lingering water deficits and pastures or crops that can’t fully recover.

Come Sunday, there is a 30 percent chance of showers and thunderstorms. That chance goes into Monday and decreases to 20 percent on Tuesday.