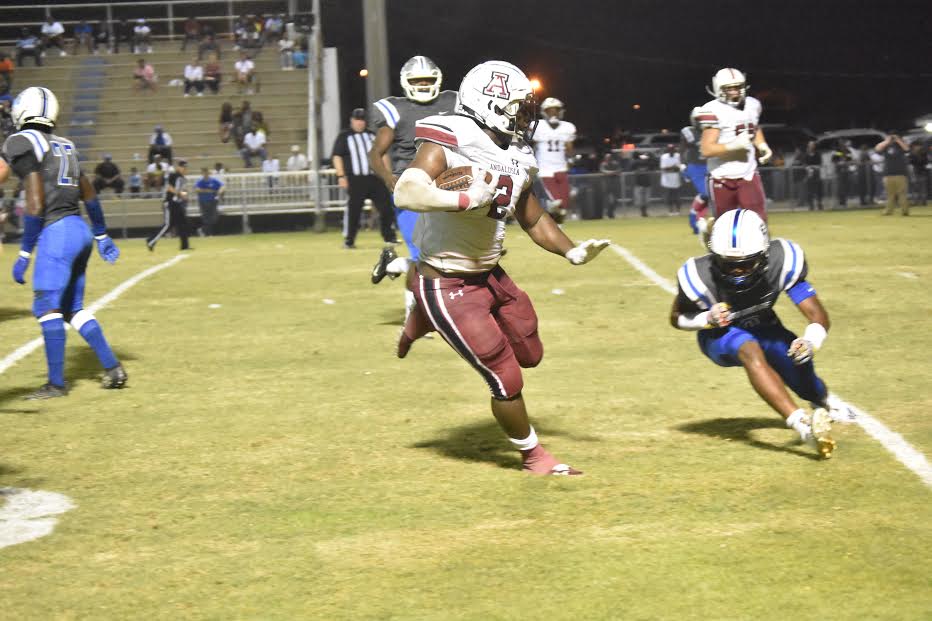 The Andalusia Bulldogs picked up a big area win on Friday night in Atmore when the knocked off the Escambia County Blue Devils 28-0.

Escambia County started the night with ball, but the Andalusia defense forced a quick three-and-out.

The snap on the punt was low and the Blue Devils turned the ball over deep in their own territory.

Andalusia’s offense went backward on penalties and were forced to try a long field goal.

The attempt from 50 yards had the distance but missed wide left.

Escambia County’s Jacob Hammac picked up a couple of first downs for the Blue Devils on the next drive, but Andalusia forced a turnover on downs.

Andalusia’s next drive started with a pass from Jake Wilson to Elijah McClain for positive yards and then Wilson went 5 yards on the next play for the first down.

However, the drive stalled and the Bulldogs had to punt the ball away.

Escambia County’s next drive saw a little production, but the Bulldog defense stood tall to force another punt.

McClain broke off a solid run on the next drive, but a bobbled snap a few plays later left the Bulldogs with a lot of yards to gain.

The offense couldn’t get going and had to put the ball away.

On the Blue Devils’ next drive, Escambia County attempted a middle screen, but Andalusia linebacker Austin Hall went unblocked up the middle.

Hall was able to pick off the pass and take it 30 yards to the end zone.

Reese Burkhardt knocked home the extra point to give the Bulldogs a 7-0 lead with 3:20 left before halftime.

Andalusia’s defense came up with another three-and-out and the Bulldogs took a 7-0 lead into halftime.

Both teams traded punts to start the third quarter.

Cam Morrisette and McClain put on show in the Bulldog backfield on the next drive as they thunder and lighting duo drove the ball down the field.

Josh Gurley capped off the drive with a 1-yard score. Burkhardt’s extra point gave Andalusia a 14-0 lead with 3:26 left in the third quarter.

Andalusia’s defense continued to dominate the line of scrimmage and came up with another three-and-out.

On the offensive side of the ball, Morrisette brought the thunder again while McClain provided the lighting as the pair led the Bulldogs down the field.

Morrisette finished off the drive with a touchdown as the Bulldogs went up 21-0.

The Andalusia defense showed no signs of letting up as they continued to drive the Blue Devils off the ball and forced another three-and-out.

McClain then had a few big carries for the Bulldogs and Caleb Smallwood ended the drive with a 4-yard touchdown.

Burkhardt’s extra point gave Andalusia a 28-0 lead with 6:39 left in the game.

Andalusia was able to hold the Blue Devils out of the end zone for the second straight shutout.

“We didn’t play real well in the first half,” Andalusia head coach Trent Taylor said. “Give Atmore a lot of credit because they had a lot to do with that. I was certainly proud of the way we played in the second half. We’ve got somethings we’ve got to fix. Things that at this time of the year we shouldn’t have to fix. We’ve still got two big ones left. W.S. Neal at home next week. At least we are at home these next two weeks.”

Andalusia’s defense came up with their second shutout in as many weeks to help lead the team to victory.