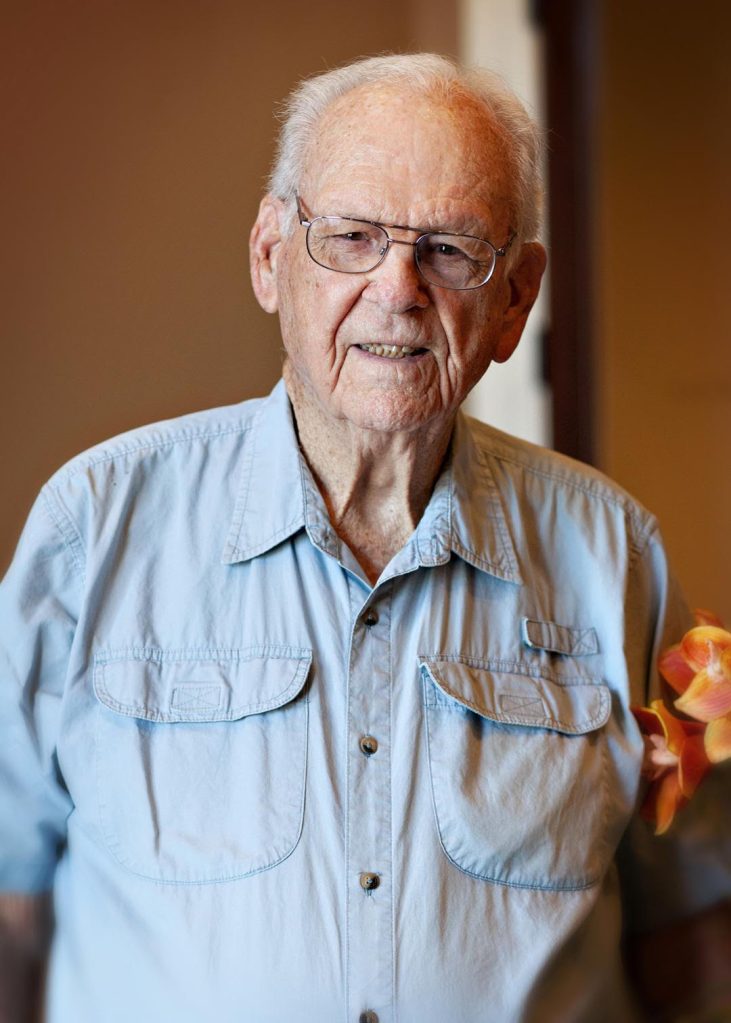 At 92 years of age, Ray Sibley has remarkable recall of those WW II operations that took place
almost 75 years ago.
Raiford [Ray] Sibley was born Dec. 26, 1926, in Baton Rouge, La. His parents were George
Washington and Mona Mae Sibley. Ray had one brother, George W, Jr.
Ray attended Istrouma High School in Baton Rouge and graduated in 1944 at 17 years of age.
His older brother, George W Sibley, Jr. was fighting in France at the time and was badly
wounded. That caused Ray to enlist at 17 which was below the draft age of 18.
Ray completed basic training in San Diego and shortly found himself aboard the USS Audubon, a
Navy troopship bound for the Philippines. They landed on the island of Samar and offloaded
troops. Ray was sent to the USS Caliente, as fast tanker. Navy tankers are notoriously slow ships
but the Caliente was a fast tanker, designed to keep up with Admiral Nimitz’s fleet of fast
aircraft carriers. Ray remembers refueling some of the carriers at much faster speeds than
normal because of the need to stay ahead of Japanese submarines.
Ray was a Quartermaster Seaman, which required him to spend much time on the ship’s bridge,
helping plot courses and navigate the ship.
Some of the first trips they made were to the middle east delivering fuel to places like Bahrain,
which required them to sail all the way around India and up the Arabian Sea to get there.
Returning to the South Pacific, the Caliente refueled ships in places like Ulithi and Okinawa.
They were in the midst of more than one typhoon which caused the loss of several Navy ships
and men.
The war ended on Aug 15, 1945. The day the Japanese signed the surrender documents aboard
the battleship, USS Missouri, Ray’s ship, the Caliente was close by, anchored in Tokyo Bay.
The Caliente was sent to N. Japan for a week and Ray recalled how friendly the Japanese
civilians were [they had expected them to be very hostile].
Next, the Caliente sailed up the Inland sea to Hiroshima, site of the first atomic bomb drop. The
sailors were allowed to disembark and visit the city, or what was left of it. Ray remembered a
totally desolated site with nothing but devastation as far as you could see. They were allowed
to walk amidst the ruined city. The military brass knew very little about the dangers of radiation
after an atomic explosion, so the men walked around freely with no restrictions. At 92, Ray
doesn’t appear to have suffered any ill effects.
Shortly after the visit to Hiroshima, Ray boarded a troopship and was sent back to the states,
landing at Treasure Island, near San Francisco. He took a train to New Orleans where he
received his discharge.
A year or so later, Ray started college at LSU, utilizing the GI Bill. He graduated in 1951 with a
degree in Forestry. In 1952, Ray married Betty Jo Caldwell in the Chapel at LSU and began work
in sales with Esso Standard Oil Co. They had 3 sons: Lowell B [Sarah], Bryan C and Bartley D.
Ray and Betty remained in Baton Rouge with Esso Standard until they sent him to Gulf Breeze,
Fl in 1962. He remained with the oil company until his retirement in 1976. Ray was a sales
manager over S. Alabama and N W Florida during that time. One of Ray’s customers was Fred
Price who owned the Standard Oil dealership in Andalusia. Their families became friends and
Ray purchased property in Covington County near Blue Lake in 1971. They have been spending

lots of time there since then. Many memories of hunting trips and time spent in L A [Lower
Alabama] stay with Ray still.
One of Ray’s most precious memories are of the times when his grandson, Forrest [son of
Lowell and Sarah] came to visit. This part of the story can best be told by Michele Gerlach who
wrote about Ray and Betty Jo and their grandson, Forrest in 2015. Forrest, age 31, was assigned
to the 21 st Special Tactics Squadron based at Fort Bragg, N C, and was on his 4 th deployment to
Afghanistan in Aug 2015. Forrest and his fellow soldier, Capt. Matt Roland , were ambushed and
killed by Alghan soldiers [so called green on green attacks] in Helmand Province. Please read
the article that talks about this special young man and the bond he shared with his
Grandfather, Ray Sibley. Like so many members of The Greatest Generation, Ray Sibley and his
family continue to serve our country with sacrifices, dear and unknown by so many who are
the beneficiaries.