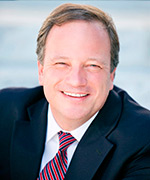 He spent 23 years practicing law in the Andalusia firm founded by his great-great grandfather, Edgar T. Albritton, in 1887. During that time, he represented and advised numerous elected officials and other public sector clients such as counties, municipalities and public boards and corporations. His representation included ensuring compliance with the Alabama Ethics Law, statutory and regulatory compliance, and litigation.

Albritton formed the Mabel Amos Memorial Foundation and serves as one of its three directors. The Foundation is responsible for awarding college scholarships to Covington County Students. He also serves on the board of the Andalusia High School Scholarship Foundation.

Albritton was tapped to lead the Alabama Ethics Commission in 2015, and soon found himself in the center of state news. In 2017, the Alabama Ethics Commission found probable cause that then-Gov. Robert Bentley had violated state ethics and campaign laws. This finding, coupled with impeachment proceedings in the House of Representatives and an investigation by the Alabama Attorney General’s office, led to the governor’s resignation. At the time, the House Judiciary Committee was chaired by Rep. Mike Jones of Andalusia, who was also a member of the Class of 1985.

“Tom is not afraid to speak truth to power, and continues to be a voice and advocate for strong ethical standards in our state,” wrote his nominator. “Prior to his move to Montgomery, he was a constant advocate for higher education standards in the local school system.”

In a letter of support for his nomination, Andalusia City Clerk John Thompson, who worked with Albritton when he served as city attorney, wrote, “During all the years I have known Tom, he has conducted himself with honor and dignity. He was a leader in high school and became and Eagle Scout before in enrolled in the University of Alabama. After graduating from Law School at Alabama, Tom came home to Andalusia to practice with his family’s firm, at that time the oldest law firm in the State of Alabama in continuous operation. In 2015, Tom left Andalusia to become executive director of the Ethics Commission of the State of Alabama. He has led the Ethics Commission through tumultuous times, early in his tenure, again with honor and dignity.”

Albritton is a graduate of the Leadership Alabama; a former president of the Covington County Bar Association, and a three-term member of the Alabama Board of Bar Commissioners, Alabama State Bar.

“He is a committed to lifelong learning, and very invested in the work of the Pittulloch Foundation in Atlanta, which facilitates intense travel and study in the Holy Land.”

The foundation chose him to participate in its three-week Middle East Travel Seminar, and he now serves on the selection committee for the Atlanta, Georgia-based group.

Albritton and his wife, Amanda, have two children, Hunter and James, both of whom are Andalusia High School graduates. He is the son of Harold and Jane Albritton.

Editor’s note: This is the first in a series about the 2019 AHS Outstanding Graduates. Other honorees include Janette Carroll, Cara Beste Russell, Darrell Thomas and Sue Bass Wilson. They will be recognized at a luncheon on Friday.