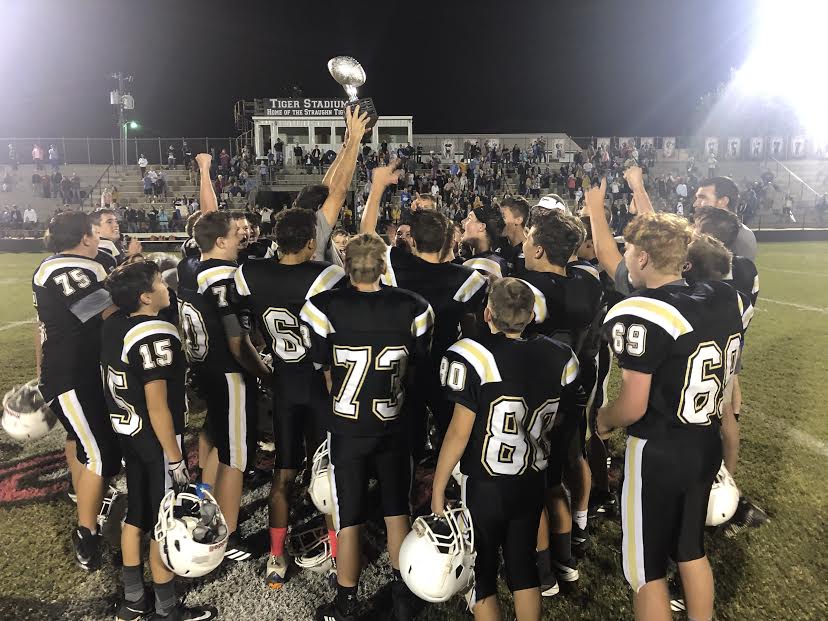 The Tigers started off right away, with Michael Grantham running the opening kickoff for a touchdown. After a successful two-point conversion, SMS was up 8-0.

On the next DMS drive, a sack by Grantham and #64 caused a turnover on downs. The Tigers took over on their own 33-yard line.

Grant Barnes then ran for two first downs at the beginning of the second quarter to get the Tigers into D.A. Smith territory on the opposing 5-yard line.

Nicholas Williams then took it to the house to increase the Tiger lead 16-0 after another successful two-point conversion caught by Williams.

On the next kickoff, Grantham ran it down and scooped it up for SMS to get the ball right back with 2:17 left in the half.

With 27.6 seconds left in the half, Parker Black caught a pass for a first down on the 3-yard line.

A Straughn running back then punched it in the end zone to go up 24-0 after another successful two-point conversion by Barnes.

With four minutes left in the third quarter, SMS managed to convert on two third downs and then Williams broke a 50 yard run for a touchdown to go up 30-0.

Williams didn’t stop pushing at the end of the fourth quarter and rushed for two more first downs to get to the opposing 3-yard line.

#3 then rushed for another touchdown and two-point conversion to end the scoring for SMS at 38-0.

With 30 seconds left, D.A. Smith threw it up in the end zone for their sole touchdown of the night.

“These kids played a fantastic game tonight,” Head coach Michael Smith said. “D.A. Smith has got a good football team. We went over there earlier this year and beat them there, as well, but tonight the boys did everything we asked them to do.”

Smith said the kids were the ones who deserve all of the credit.

“They have been here since August working every day,” Smith said. “They never complained, showed up every day and worked really hard to get us this far. You can’t describe how amazing this season was. These kids are a very special group of kids and I am proud of everything they have done.