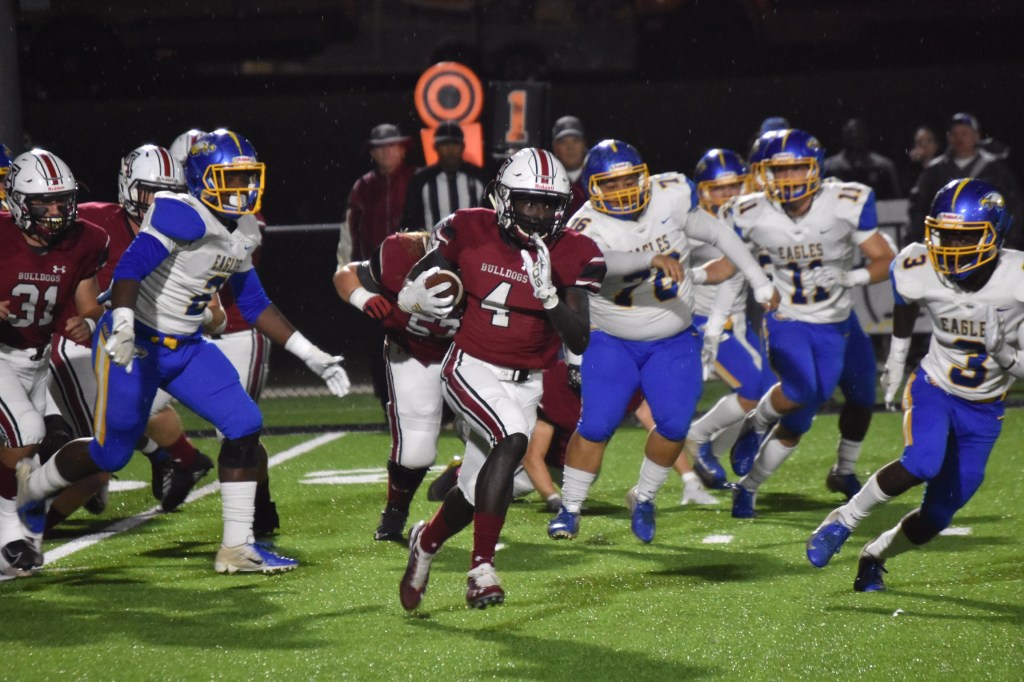 The Andalusia Bulldogs came away with a 49-12 region victory over the W.S. Neal Eagles on Friday night in Andalusia.
With the victory, the Bulldogs secure a spot in the Class 4A state playoffs.
Andalusia got the ball to start the game, but had to punt after three plays.
The Bulldog defense went to work and came up with a big stop to force a punt from the Eagles.
Andalusia didn’t take long on offense as Elijah McClain broke loose for a 79-yard touchdown run on the first play of the series.
Reese Burkhardt drove the extra point through the uprights to give Andalusia a 7-0 lead.
Andalusia’s defense led by Derrick Wright, Patrick McCorvey, Josh Gurley, Caleb Smallwood, Austin Hall and Cameron Morrisette made another big stop to give the ball back to Andalusia’s offense.
The Bulldog offense then got a huge 48-yard touchdown from Morrisette to put the Bulldogs up 14-0.
Andalusia’s defense continued to assert their dominance on the Eagles as a tipped pass found it’s way into the hands of Omare Latimer who returned it into the red zone.
Morrisette drove the ball down the 1-yard line where Gurley punched it in for the touchdowns.
Burkhardt’s extra point gave the Bulldogs a 21-0 lead.
The Bulldog defense continued to play lights out as the quickly got the ball back the Andalusia offense.
McClain made short work of the Eagle defense as Jean Jones and the Bulldog offense line opened up another huge hole for the Andalusia running back.
McClain took the ball 62 yards to the house to put the Bulldogs up 28-0.
After another big stop by the Bulldog defense, Andalusia’s offense went right back to work.
This time, Andalusia quarterback Jake Wilson connected with Zymon Ray in the end zone for a 33-yard score.
Andalusia would then take a 35-0 lead into halftime.
The Bulldog defense went 10-straight quarters without giving up a score until the Eagles finally broke through with a score in the third quarter.
McClain’s big night continued with a 59-yard touchdown that gave Andalusia a 42-6 lead.
Andalusia finished off the scoring in the fourth quarter when Dorean Crittenden capped off a drive with a touchdown. Crittenden had a big 30-yard gain before scoring from 1-yard out.
Andalusia would go on to win 49-12.
McClain finished the night with 213 yards on six carries and three touchdowns.
“The biggest thing is that this was one of those games where we kind of took control early,” Andalusia head coach Trent Taylor said. “We won the line of scrimmage on both sides of the ball. Anytime you play a Wing-T team, that’s really tough because it’s something you don’t see a whole lot. It’s great to have a game like that at this point in the year where you can get those young guys in.”
Andalusia wraps up the regular season next week at home against Clarke County. This will be Andalusia’s homecoming game.
“I told the guys four weeks ago that we needed to get three of the next four to make the playoffs,” Taylor said. “I don’t know what the scenario is, but I think we put ourselves in. The thing is, we don’t want to let up. We are playing really well on both sides of the ball right now and we want to make sure we continue to do that.”