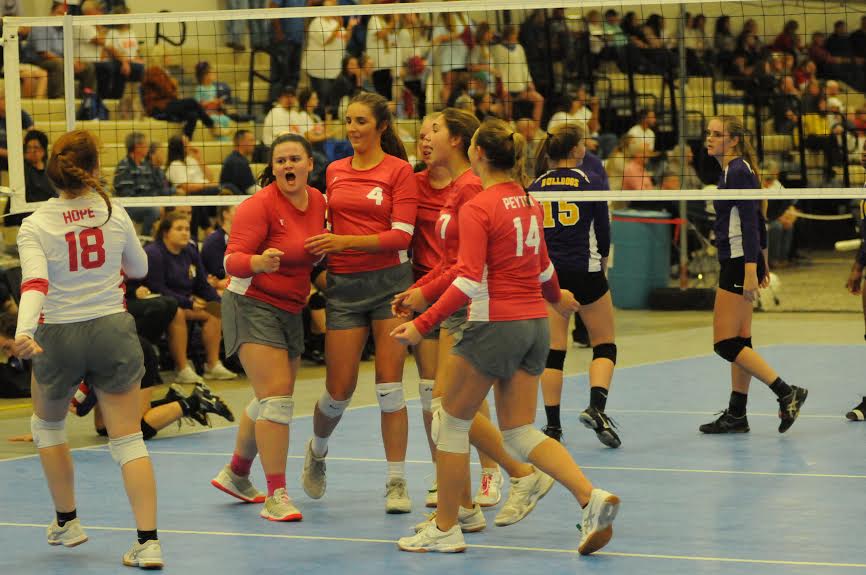 Their tickets have been punched once again.

Pleasant Home will make its sixth straight appearance at next week’s Class 1A state volleyball tournament after sweeping Sweet Water and Holy Spirit in the AHSAA’s South Super Regional on Thursday at the Multiplex at Cramton Bowl.

PHS coach Tony Wilson said the girls picked up their play in the second match against the Lady Bulldogs.

“We knew coming into this match (against Sweet Water) — I thought it was going to be a little bit better,” Wilson said. “The competition was exactly what we thought it would b. The girls were more into this game because there’s a lot riding on this game.”

The state tournament is slated for Oct. 30-31 at the Crossplex in Birmingham.

Wilson said the girls did an excellent job cutting down their service errors, and “to play what’s given to them.”

In the state qualifying match, Pleasant Home’s Sarah Kathryn Guilford led the Lady Eagles with 23 kills, one ace and an assist.

The Lady Eagles punched out a 11-5 in the first game, thanks to one of Guilford’s kills. She added another later for a 16-10 margin.

Amy Bulger’s kill brought the Lady Eagles’ lead to 11-5 soon after. Guilford killed the ball a short time later to make it 17-10.

Wilson said they worked on setting (passing) the ball as the playoffs drew nearer.

Pleasant Home’s Daisy Cordle got a nice block, and the Lady Eagles led 7-1 early in the third and deciding game. From there, PHS dominated on serve, and a stout outside hitting game from Guilford and Bulger, along with the middle front, contributed in the winner.

Wilson said Guilford does a good job in her role on the team as well as others on the squad.

“She knows if she doesn’t get it, if that first pass or set isn’t there, then don’t take it,” he said. “Then, it goes through there. But it has to go through two other people. Sometimes our setter gets taken out, and you see girls stepping up and that’s what I like about them. They’re all just about doing what they’re supposed to.”

Peyton Huckabaa led the Lady Eagles with 26 assists, and six aces. Bulger and Cordle had five kills each.

AHS coach Angie Grimes said the girls made if farther this year than last year.

“If you’re going to get beat — they (Montgomery Catholic) were a class act team,” Grimes said. “I’m glad the girls hung in there until the last minute. We tried to make adjustments and improvements, but by the time we started playing some — sometimes they’re just much better.”

Next season, the Lady Bulldogs will be without their three seniors from this year, but have plenty of experienced players returning, including Kathleen O’Neal, Maddie O’Conner, Savannah Kelley and Ashland Kelley, and Anna Duffy, Grimes said.

The Lady Bulldogs ended their season 12-22.

ELMORE TO BE INDUCTED INTO HOF