Celebration of Heroes to feature six local veterans in exhibit 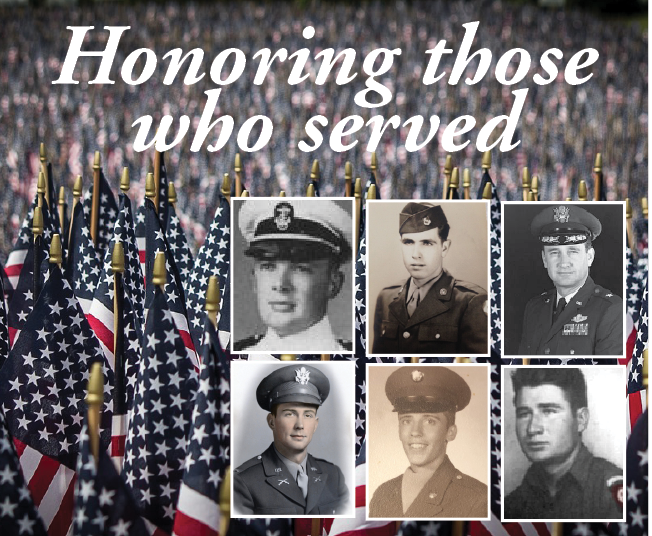 The Covington Veterans Foundation will share the stories six local veterans when it kicks off its Inaugural Celebration of Heroes at 2 p.m. Sunday, Nov. 3, in the Andalusia High School Auditorium.

• Evans was killed while serving as a squad leader in a reconnaissance sweep near the Tay Ninh Province in the Republic of Vietnam on July 18, 1969. He was posthumously awarded the Medal of Honor for “conspicuous gallantry and intrepidity at the risk of his life and beyond the call of duty.”

• Cross was a military aide and chief pilot for the Air Force One when Lyndon B. Johnson was president.

• Anthony was awarded the Silver Star, the nation’s third highest honor. As a platoon leader, he charged a German machine gunner, saving the lives of many Americans. He also helped liberate prisoners from the concentration camp in Dachau.

• Foshee was a pilot with the Flying Tigers, the nickname of the American Volunteer Group (AGV) recruited and commanded by Gen. (ret.) Claire Chennault to defend China from Japanese invasion. They went quietly to China before the United States entered World War II. He died on May 4, 1942.

• Saunders was assigned to the 795th MP Battalion, and attached to the 4th Infantry Division in WWII. He was one of 25 elite MPs to escort French General Charles de Gaulle on his entry into Paris after the city was liberated, and later guarded Nazis Herman Goering, Rudolph Hess, Albert Speer and others at the Nuremberg Tribunals.

• Rodgers was one of 24 paratroopers who dropped behind German lines prior to the invasion of Normandy on June 6, 1944. He killed 40 German soldiers before his death and received the Distinguished Service Cross.

Reserved parking is available at the high school for WWII veterans and for Gold Star families. They also will be recognized during the program.

Other highlights include performances by the Andalusia High School band, the “Andy Sisters” Three Notch Ramblers and the Andalusia Male Chorus.

Following the musical program, a reception in the Andalusia City Hall will mark the opening of the exhibit.