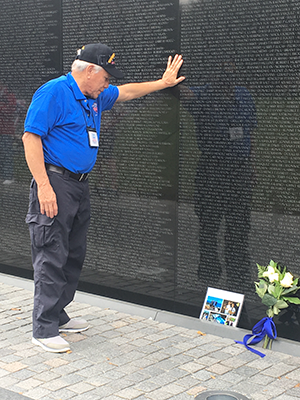 Covington Region Honor Flight is gearing up for its next flight and has some changes in the works.

The local organization took its first flight in 2009 and has flown numerous World War II, Korea and Vietnam veterans to Washington, D.C., for a day celebrating them. CRHF is the only hub in Alabama.

Starting with the spring 2020 flight, which is tentatively set for April 24, veterans and guardians will no longer take a bus to Atlanta and board a plane to Washington, D.C.

Previously, participants would be gone 24-26 hours straight, but with the new set-up, it will be much shorter in travel time to and from the airports.

One other change is that CRHF has traditionally taken around 54 participants at a time.

“We are excited to be able to offer the experience more than once a year,” Majors said. “We believe that having two options each year will give those who may not have the opportunity to go at a certain time to do so at our additional flight for the year.”

The flight is free of charge to veterans of World War II, Korea and Vietnam.

Guardians are welcome to attend and pay their own way, which is $450 per person.

During the trip, veterans are able to visit the World War II Memorial, Vietnam Wall, Korea Memorial, Lincoln Memorial, Iwo Jima, Air Force Memorial, see the Changing of the Guard at Arlington National Cemetery and see countless other national places of interest from a bus tour.

“We love being able to say ‘thank you’ to our veterans for their sacrifices for our freedoms,” Majors said. “Our veterans are always greeted with moving standing ovation when they arrive at Reagan National Airport. The Changing of the Guard is also among the most moving parts of the trip. We hope that through our efforts that every World War II, Korea and Vietnam veteran in our county and around the state has the opportunity to visit the monument for the war or conflict, and that we get to meet them and honor their sacrifices.”

“Our local businesses and civic organizations go above and beyond to help make these trips a reality, and we are most grateful for their continued generosity and their support of this amazing trip,” Majors said. “From the time we meet the veteran on the day of Honor Flight until the time we depart from our designated meeting spot, we pay for all their meals, snacks, airfare, bus rental, etc. In reality, it takes about $450-$500 per veteran per trip. Since we are the only hub in Alabama, we take veterans from all across the state. Additionally, the state of Mississippi doesn’t have a hub and we also take veterans from their state, as well as the Florida Panhandle. We welcome donations from other areas to continue to make this possible.”

Those interested in participating or making a donation may call 334-222-2402 for more information.

12 have qualified for GOP primary