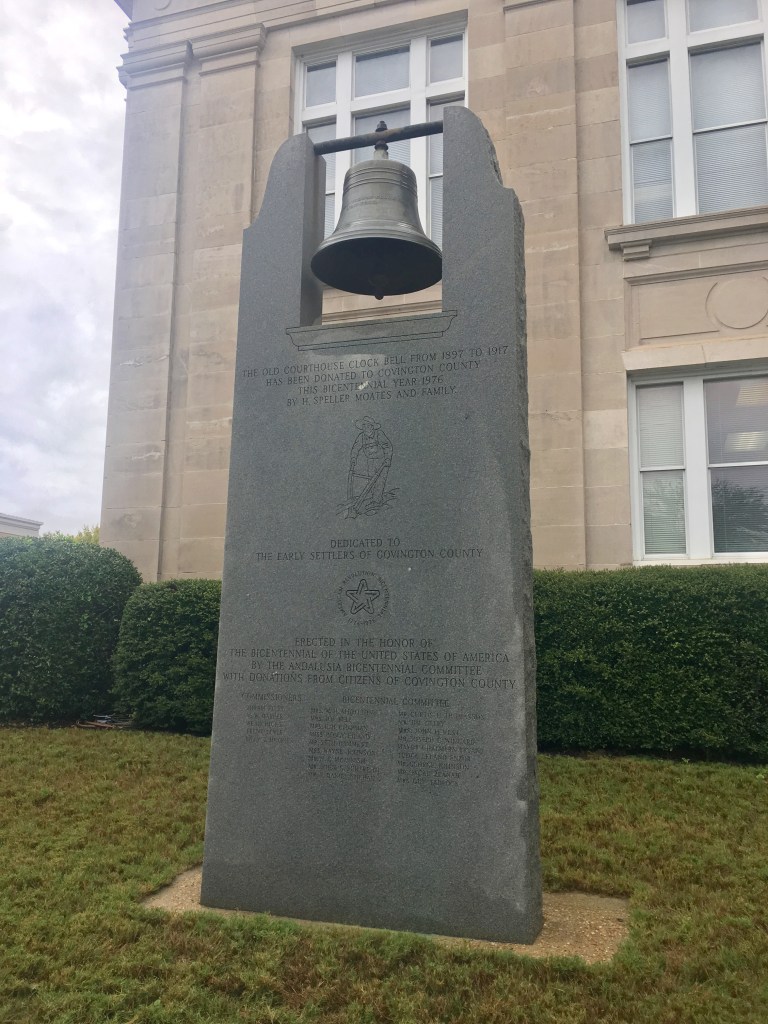 The Covington Veterans Foundation has been established this year of 2019. John Vick and Judge Ben Bowden have spearheaded this group which serves to honor Covington County veterans, living and dead, and active serving members of the armed forces of the county. On the occasion of Veterans Day, during the month of November, the newly created foundation in partnership with the City of Andalusia will celebrate its inaugural “Celebration of Heroes: A Salute to Covington County Veterans.”

The two-week event, November 3-16, begins with a Sunday afternoon official Alabama Bicentennial event, a musical celebration at the AHS Auditorium, November 3, 2:00 p.m., and the opening of a veterans historical exhibit at City Hall which focuses on the contributions of local veterans. Gold Star families will also be recognized at the assembly. Patriotism will be highlighted in grand ways.

Tribute Banners will fill the Andalusia Court Square and surrounding streets with names and faces of local veterans.

I am reminded of the late Sidney Waits’ article in one of his books (1991) on “Sketches of Early Covington County and Andalusia, Alabama” – Monuments On Our Courthouse Lawn.

“I enjoyed a visit to Court Square one afternoon recently. I wanted to view two monuments on the courthouse lawn and enjoy the architectural exterior beauty of our courthouse.”

“The two monuments are interesting. The old Seth Thomas bell that was a part of the clock tower in the 1895-1918 courthouse in the middle of the square is a prize from our past. It is hanging in a granite shaft on the front West lawn. Upon completion of the present courthouse, Benson Hardware Company was awarded the contract to remove the old courthouse from the center of the square area. All of the clockworks were removed and stored in their old warehouse on Central Street that later became the General Telephone Exchange building. Several years later before GTE moved in, the bell and the clock works were taken to the local junk yard. Speller Moates noticed the old bell and purchased it from ‘Junk Jones.’”

“For many years, Speller kept the old bell at home on a frame made for that purpose. During the Bicentennial year of 1976, Speller and his family decided to give the bell to the community. It has been appropriately mounted and preserved for all to enjoy. The inscription reads: ‘Donated to the citizens of Covington County by H. Speller Moates and Family.’ It is dedicated to the early settlers of Covington County. The Bicentennial Committee is listed on the face of the monument.”

Sidney Waits goes on to write, “I am very proud this old bell escaped the junk pile and is a part of our community life today. It is certainly a monument that expresses a great heritage and a monument of which we can all be proud.”

Another interesting monument is located on the East front lawn of the courthouse. It was placed there in 1976 by the Altrusa Club. It reads as follows: “In Memory of Philip Nolan, Lieutenant in the Army of the United States. He loved his country as no other man has loved her, but no man deserved less at her hands.”

“I think it is an unusual monument in that it is a marker to commemorate someone that never really existed – a fictional character. This character is taken from a very famous story written by Edward Everett Hale (1822-1909). Hale wrote many books but only the short story, “The Man Without a Country,” in 1863 which has remained well-known. It is story of a young army officer, Philip Nolan, who exclaimed in a youthfully rash statement during his trial by court martial that he wished he would never hear of the United States of America again. He was subsequently by order of the judge put on a ship with instructions that no one was ever again to give him any news of his own land. For the remainder of his life, Nolan went from one naval ship to another with orders to prevent him from hearing any talk of the United States or reading anything about his country.”

“Before he died, he redeemed himself and begged for reconciliation with his country. When he lay dying, the captain of the ship came to see him and found Nolan draped with stars and stripes around a picture of George Washington. A map of the U. S. which Nolan had drawn for memory was at the foot of his bed. The captain feeling pity for him told him about the progress of the U. S. including the westward expansion during the more than fifty years of Nolan’s exile. The captain could not bring himself to tell the dying man that the United States was engaged in the Civil War. In the story, Nolan died in 1863. His last request was that he be buried at sea, his only home.”

The late Joe Wingard, AHS English teacher, as many of you readers know, was a romantic in his penning of poetry and reading of literature. According to his teacher friend, Dan Shehan stated when I asked him to refresh my memory of the purpose for the monument placed in 1976, “I believe Joe was trying to show how wonderful and blessed we are to live in this country, a fact one cannot fully appreciate until he loses the privilege.”

I am thinking that Mr. Wingard, the American patriot that he was through and through, believed it was appropriate to place a visual reminder to us all during the 200th year celebration of the founding of our country (1776-1976). After all, Joe was the official “Town Crier” and Chairman of the American Bicentennial in Andalusia.

Waits also wrote about a monument on the courthouse lawn that dated back to World War II when “most of us were off in the service doing our part in the great conflict.” He told about the Jaycees erecting a large wooden case with a glass front with the names inside of all the sons and daughters who were serving in the war. Upon his return from the war, he remembered visiting the wooden monument and viewing his own name and the names of his fellow Covington Countians, many of whom did not return. Exposed to the elements, the wooden structure did not last for too many years, and it was eventually removed from the lawn.

“The American Legion presented a miniature Liberty Bell as a memorial. It graces the lobby. The Andalusia High School has a plaque on the wall of the high school lobby which lists veterans by high school years and displays a star by each name of the student lost in the war. There is also a plaque in the American Legion Hall paying tribute to those men and women who have served their country in various wars.”

“The thought occurred to me,” Waits concluded “why wouldn’t it be a good thing for us to erect a small but impressive monument to veterans of all wars? The courthouse lawn would be a perfect place for it. It should be there and it can be if we want it there.”

Hmmm, something for the Covington Veterans Foundation to ponder.

Like I have written before, “The pen is mightier than the sword.” Even after we pass away, our words can still hold great meaning.

A conversation I had last homecoming weekend with Bill Rue, Sid Waits’ nephew, he was in the AHS Class of 1960, made me appreciate Sidney Waits even more than I already do. He stated that Sidney was a student at the University of Alabama when World War II broke out. He left college to join the service (or be drafted). He was stationed in the Panama Canal zone where troops were placed to monitor and guard the canal from the enemy. During the war, Sidney’s father passed away (December 1944) and when he returned to Andalusia, he had to take over the family oil business. Bill stated, “Wouldn’t Sidney have been a wonderful history professor? He, however, just did what he had to do at the time!” I agreed, but then understood why Sidney began a lot of historical writing during his retirement. That was his passion, preserving Andalusia and Covington County history.

A special magazine will be inserted in The Andalusia Star News this Saturday with stories of veterans. Each year, the Covington Veterans Foundation plans to add additional stories so make the CVF members aware of those who need to be included. Do plan to attend the event on Sunday afternoon, November 3 at the AHS Auditorium. We will Remember When those who served and still serve, those who contributed and contribute to the freedoms we enjoy today.